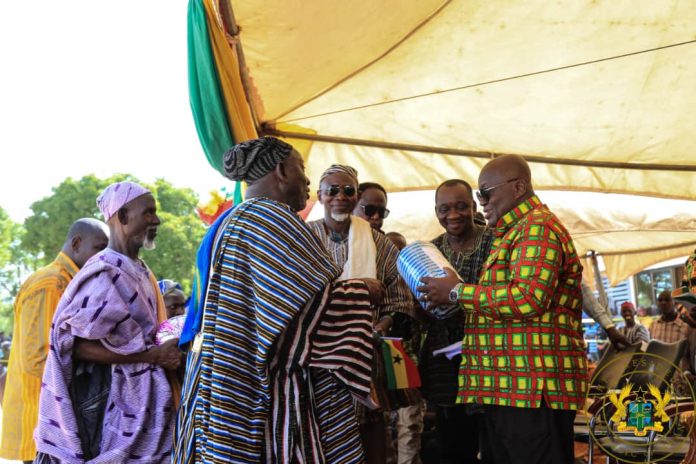 According to the Yagaba Chief, “Your flagship programmes such as the Free Senior High School Education will forever go down in the history of this country as the most people centered policy that helped in alleviating poverty in this country.”

Naa Sugru Wuni Mumuni added that “many were those who said you will never fulfill this campaign promise. Infact, the sceptics said you were simply desperate for power, hence the juicy and unattainable promises. The story has, however, changed today. People from this part of the country could never dream of enrolling into the known prestigious schools, mostly located in the southern sector.”

In buttressing this point, he stated that not less than 20 students from the Mamprugu Moagduri district have gotten admission in schools such as Prempeh College, Adisadel College and the other prestigious senior high schools in the country.

“The Free SHS has helped in reducing kayayei in Mamprugu Moagduri, because your government takes care of school fees, and students do not need to travel down south to engage in menial jobs in order to enable them pay their fees,” the Chief added.

Naa Sugru Wuni Mumuni made this known on Friday, 17th May, 2019, when he held a durbar in honour of President Akufo-Addo at Yagaba, on day 2 of the President’s tour of the North East Region.

He expressed the appreciation of the Chiefs and people of Yagaba to the President for initiating pro-poor policies.
“Mr President, this area is predominantly a farming community. Your social intervention policy of Planting for Food and Jobs led to a bountiful harvest in this district. Fertilizer subsidies under this flagship programme have boosted our local economy,” he said.

Naa Sugru Wuni Mumuni also thanked President Akufo-Addo for the “expansion of the LEAP programme”, which, he said “has equally reduced economic and social suffering. We continue to pray that all of these initiatives and those yet to come will move Ghana beyond aid as you have envisioned.”

Man, 47, poisons self after inflicting machete wounds on 32-year-old wife