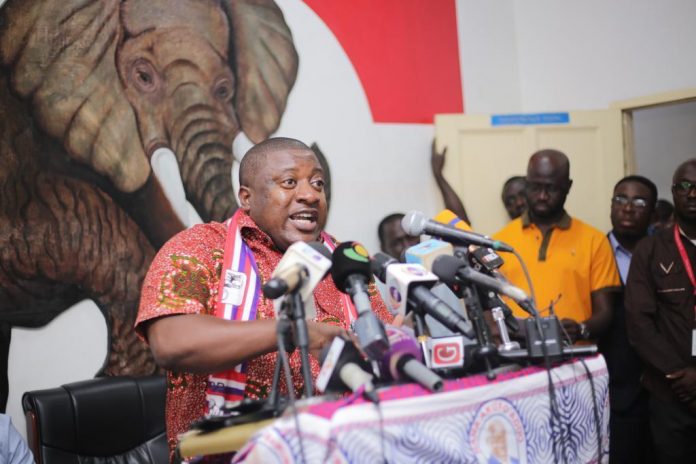 President Akufo-Addo has successfully completed his two-day tour of the Volta Region. The extremely warm reception he received in, what is historically, the NDC’s World Bank is what has shocked and destabilised the Opposition NDC so much that they bought airtime all across the country yesterday to do what they do best: play the hate card with their bogus list about Akufo-Addo’s government and the ties of the people who have been appointed.

The people of the Volta Region, by their embrace of Akufo-Addo and the NPP going into 2020, is to say to John Mahama and his National Democratic Congress that: “2020 IS VOLTA BEYOND NDC”. The Region, with its beautiful landscapes but economically sidelined for generations is saying enough is enough.

Volta Region is deliberately weaning itself off its ancient dependency on the NDC. NDC has not aided the Region. John Mahama and his party has only raided the place every four years for votes and not aided such a beautiful Region for development. A political dependency that has kept their schools underperforming, their roads bad, the young people unemployed, and their three decades of loyalty to NDC unappreciated and comprehensively abused. That is why everyday more and more people from the Volta are saying: “2020 is Volta Beyond NDC”.

On behalf of the National Chairman of the New Patriotic Party, we wish to thank the good people of the Volta Region for their heartfelt reception. Our special thank you also goes to the traditional leaders. The people are warm to NPP today because they know that, against all the propaganda, Akufo-Addo has not discriminated against them.

Indeed, our own party people in the Region has expressed concerns over the decision by the President to handover his constitutional powers to appoint MMDCEs to the people to vote directly for their majors under whichever party colours they want. This means that the era of winner takes all can be put behind us. Such a selfless, non-partisan, patriotic gesture from President Akufo-Addo has made indeed the whole nation see that in Akufo-Addo they truly have a national leader. It is this national fever for a second term for Akufo-Addo and the NPP that is disturbing John Mahama and the NDC.

Just as it is evidently showing in other parts of the country, the people of the Volta Region also have their children going to secondary school. Indeed, out of the 1.2 million students currently enjoying free Senior High school education, about 100,000 of them are estimated to come from the Volta Region. They saw how the collapse of the NHIS affected their people and now enjoying an improved National Health Insurance Scheme, after the NPP cleared over GHS1 billion in legacy arrears. Volta farmers are major beneficiaries of the Planting for Food and Jobs policy. They have seen some of their young graduates being enrolled on NABCO. They have seen how the lowest inflation rate since 1992 is helping workers and families keep better the value of the money in their pockets. This is the change the nation voted for in 2016 and this is the change that the 16 Regions of Ghana are planning to maintain and improve upon. This is because we are the first to admit that there is a lot more work ahead of us. Ghana needs a president who enjoys doing the job and not one who enjoys just the trappings of the office as we saw under President John Mahama.

Ladies and Gentlemen, the Paramount Chief of the Aflao Traditional Area, Togbui Amenya Fiti V, showed honesty in leadership when he applauded the efforts of the NPP in clearing the mess caused by John Mahama to stabilize the economy today. It is this stable environment that will propel Ghana to higher heights of jobs, more social welfare and prosperity.
Like we say, the next general elections is about Vision 2020! It is not for those who have no vision. Let us use this opportunity to ask Ghanaians to ask themselves a simple but very, very important question. Perhaps, the most important question for 2020: What Does John Mahama Stand For? What Does He Believe In? What Is His Vision?

At least in Akufo-Addo the Ghanaian people know what he stands for and has been consistent in what he stands for all throughout his political life. In 2008 he promised free secondary education. He stuck to it in 2012 and stayed with it in 2016 and has delivered on it in office. He campaigned on Ghana’s industrialization and adding value to our natural resources. Today, he has set up the Ghana Integrated Aluminum Development Corporation to add value to Ghana’s one billion tonnes of bauxite. It is this same bauxite that John Mahama signed away to his younger brother, Ibrahim Mahama, one week before NPP took office. President John Mahama gave 80% of our bauxite, valued at least $200 billion. Please, listen carefully, over $200 billion, of our national asset was handed over to one person, who is the younger brother of the President who dashed it to him before leaving office. It took the new government and the Supreme Court, in an unanimous decision, to show that what John Mahama did was illegal!

The records are there to show. Now we are experiencing a single digit inflation, we have reduced interest rates. We have used the past two years to fill the pit that was dug by the NDC and built a solid foundation for major economic take-off in the coming years. As usual, we challenge the doubting Thomas’ in the clueless NDC to come forward with credible facts if they want to engage in discerning discourse. We don’t want any boot-for-chale wote banter. We have grown past that politics. Up the game NDC because Ghanaians are fed up with your street and empty banters aimed at just filling space.
Friends of the media, whilst the government is busy, solving the numerous mess they created during their reign, the NDC yesterday, took a break from their visionless manifesto hunting expedition to throw dust into the eyes of Ghanaians. Ghana deserves a serious opposition. Politics is serious business.
The NDC knows that they have nothing to contribute in the competition of ideas and performances. So, they want to reduce the 2020 campaign to one of playing tribal politics, and their bogus list of family ties. What the NDC is doing is clear: they want to play the discredited Ashanti vs Akyem card; Akans vs Non-Akans card. It is a hopeless and irresponsible agenda by an opposition party that is empty of ideas and empty on performance.

The tag ‘family and friends’ orginated from the NDC itself. In 2013, a senior member of the NDC, Alban Bagbin, MP for Nadowli-Kaleo, revealed how the Mahama government was not that of the NDC but his friends and family. That was when the tag family and friends became popular in Ghana. The current Chairman of the NDC, Ofosu Ampofo on Peace FM’s morning show 23rd August, 2017, stated emphatically he is a strong believer in a “family and friends” style of government because Ghanaians are the ones going to get the jobs and not foreigners.

Ladies and Gentlemen, we are not here to do equalization, but to set the records straight. We can also come out with a tall list of people and their relations who were in the John Mahama government. Yes, there is such a tall list. But, we think it will be too cheap and unproductive. Ghanaians want to have alternative ideas to the issues confronting them and not a competition of friends and family lists.
Out of the 51 list, over 35 of them have no real family ties with the President. Some of the family members mentioned are not members of the government even though they are known members of the NPP. To name the only brother of the President and say Edward Akufo-Addo is the right hand man of his brother is as profound as saying Accra is the capital city of Ghana. You have said nothing.
Should Mumuni Bawumia have resigned from the Ministry of Interior as a civil servant because his brother’s party won in 2016? Let’s get serious! Why have a problem with Prince Sefah and Olivia Quartey, being appointed because they are friends of Urusla Owusu? It should not matter that they are known NPP activists who are also qualified to serve?
NDC had issues with 11 people on their list of 51 because those are “friends of Ken Ofori-Atta.” Please tell them that we are not sure about appointing “enemies”. All jokes aside, are those 11, who are not family members, not competent or qualified to serve? Is Keli Gadzekpo not qualified to be on a board? What about Daniel Ogbamey Tetteh as head of GSE? What about Sampson Akligoh who has been instrumental in the banking reforms?

Charles Adu Boahen is an asset to government and so are the likes of Felicia Ashley and Yoofi Grant, who helped draft at least three NPP manifestos. These are men and women of caliber who willingly left their lucrative jobs in the corporate sector to serve their country.

The world and the country are seeing what Ken Ofori-Atta and his team are doing with the economy. Their competences and sacrifices are giving the nation an economy that can create jobs and prosperity. Ken Ofori-Atta, who contributes all of his monthly salary to charity is an example of selflessness, fidelity, integrity, sacrifice and competence.

When did Michael Asare Bediako, that competent young PA to the Finance Minister, become a family member of Ken Ofori-Atta? He is not! The Minister of Roads is not related to President Akufo-Addo. Nana Bediatuo’s mother is not on any government payroll. The Ramadans worked for the 2016 victory and are competent to serve. There is not a single person who has been appointed who is on the NDC list who did not work hard for the victory or who is not competent to serve.

Ladies and Gentlemen, let us even say, all the names they mentioned yesterday are true, which of them has been awarded a contract or given a national asset like John Mahama did for Ibrahim?

Ibrahim Mahama was given a whopping 80% of Ghana’s known bauxite deposit, valued at some $200 billion.

It is not family and friends but it is about putting in office people who can be both loyal to the government and country and are competent enough to do the job. Is is the issue, as we saw under Mahama, that the people appointed are not delivering?

Dr. Ernest Addison is praises everywhere for bringing back integrity, competence and professionalism into the workings of the central bank. Unlike John Mahama who chose to appoint Nasiru Issahaku merely because he was a friend to the President.

We thank you for your kind attention

Ghanaian enterprises should be frontline actors in AfCFTA – Akufo-Addo

Closure of border worrying, open it – Mahama to Buhari

‘It makes a lot of sense’ — Ghana’s president backs calls...