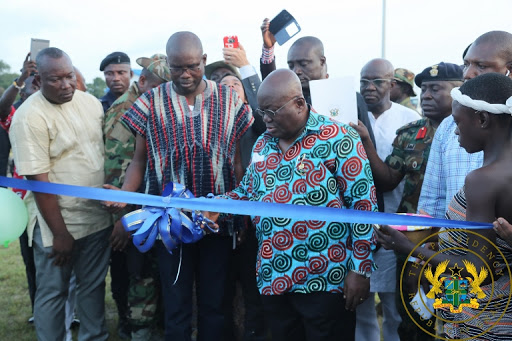 The Ghana Center for Democratic Development (CDD-Ghana) on Wednesday published details of its monitoring exercise on the implementation of the Infrastructure for Poverty Eradication Program (IPEP) dubbed the 1 Million 1 Constituency Programme.

The report chronicled the key factors including field monitoring, execution, community and local authorities’ engagement, the status of projects, assessment as well as accountability.

In 2017, President Nana Addo Dankwa Akufo-Addo, through the Ministry of Special Development Initiatives, initiated IPEP, (a new development-bottom-up approach) to provide deprived communities, basic socio-economic infrastructure aimed at reducing poverty and minimizing all forms of inequalities at the local level.

The New Patriotic Party (NPP) in August launched an online delivery tracker, touting its infrastructural achievements since it assumed office.

For instance, the report recommended the separation of IPEP projects from that of party activities, in order that it is not misconstrued as a partisan agenda to enrich some loyalists.

“There is the need to decouple IPEP projects from party programs and ensure that the DAs are not used as a political party vehicle to dispense patronage to individual party financiers, communities, and organizations in a manner that distracts them from their mandate and set them up to fail.”

Read the full below:

As part of efforts to reduce poverty in Ghana and promote inclusive growth, the New Patriotic Party (NPP) promised in its 2016 elections manifesto to allocate the Ghana Cedi equivalent of $1 million dollars to each of the 275 constituencies.

The promise dubbed the “Infrastructure for Poverty Eradication Programme (IPEP)” seeks to enhance capital infrastructure provision at the district/constituency level as a means to accelerate growth, create jobs and reduce poverty, particularly in rural and deprived communities.

Upon assumption of office, the NPP Government established the Ministry for Special Development Initiatives (MSDI) in February 2017 to implement the IPEP. It also set up three (3) Development Authorities (DAs) and their governing boards as well as an Inter-Ministerial Oversight Committee.

Given that poverty reduction programs in the past have been characterized by mismanagement, misapplication of funds, and corruption, and thereby failing to engineer the desired socio-economic transformation to reduce poverty, the Ghana Center for Democratic Development (CDD-Ghana) in 2017 launched the ‘IPEP Tracker’ project to monitor the implementation of IPEP.

The overall goal of the CDD-Ghana IPEP Tracker project is to contribute to efforts to eliminate corruption by ensuring transparency and accountability in the implementation of the IPEP. The objective of the project is as follows:

The CDD-Ghana field team also conducted site visits to all of the government priority infrastructure projects undertaken by the MSDI in all the selected 20 constituencies. This report provides a comprehensive assessment of the IPEP in the 3 years of its operation.

The report consolidates two previous reports released in 2018 and 2019 as well as findings from the final field monitoring and value for money (VFM) performance audit report undertaken by CDD-Ghana and the Ghana Audit Service between February-March 2020 in the selected 20 districts/constituencies across the country.

2.0 Key Findings from the Field Monitoring in District/Constituencies.

The findings from the IPEP Tracker report are categorized under four (4) broad headings:

2.1 Level of Community Involvement and Transparency in IPEP project Implementation.

2.2. The Operational/functional Set-up of the Development Authorities (DAs)

2.3 Level of Inter-sectoral/agency Collaboration and Coordination in the Implementation of IPEP projects

However, they see the intervention of the MSDI in the provision of these infrastructure projects as duplicating the efforts of the MMDAs and other sectors.

2.4 Assessment of Status of Government Priority Projects Implemented under IPEP

To improve the development impact of the IPEP policy and program intervention, CDD-Ghana makes the following policy recommendations:

3.2 Improve Transparency and Accountability in Contracting and Project Execution.

3.3 Citizen Engagement on IPEP at the District and Community Level.

‘We regret it’ – Multimedia apologises to Anas over extortion allegations