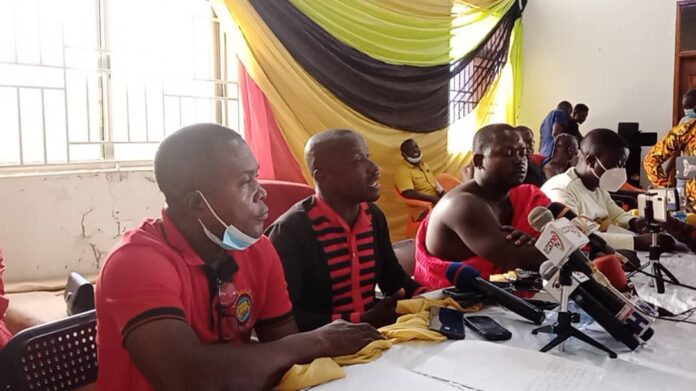 The government will soon face legal action over the burning of excavators owned by members of the Small Scale Miners Association.

The miners want to seek legal interpretation of the constitution whether a minister has the right to issue a directive for private business equipment to be destroyed or not without just cause.

They are also instituting measures to petition parliament to intervene because it is against the United Nation Convention to unleash military against citizens.

“We are in preparation to institute an action for an interpretation of the constitution at the highest court of the land to find out if a minister has the right to issue a directive for a private person’s equipment to be destroyed without just cause,” said the Former Ashanti Region secretary of the miners, Philip Bawa.

The small scale miners allege there is selective justice in the fight against illegal mining and the destruction of natural resources.

Vice chairman for Dunkwa small scale miner, Benjamin Annan, who was at a press conference organized by the miners, says there are consequences associated with what he believes to be selective justice.

“Why our chairman in Assin Fosu who is mining legally on his concession, they have destroyed four excavators on his land including other equipment. The government is pushing us too hard,” he laments.

The miners claim bigwigs within the governing NPP are engaged in illegal activities in various forest reserves in the country but the government is shielding them from military action.

“Why leave the real mine operators in the forest and attack innocent people? I can confidently tell you about a forest where people are mining but these military men aren’t entering. One of these forests is the Odaho forest. The media should follow-up,” one of the members said.

The association wonders why their legal miners are attacked when they could equally provide a solution to the problem.

“We can’t fathom why the military is burning excavators owned by legal miners.”

They also state their operations don’t violate the mining laws or destroy water bodies and the environment.

Members want the government to find better ways of addressing the situation than to use them as scapegoats.

The use of the military to allegedly harass them is another issue of concern to the miners.