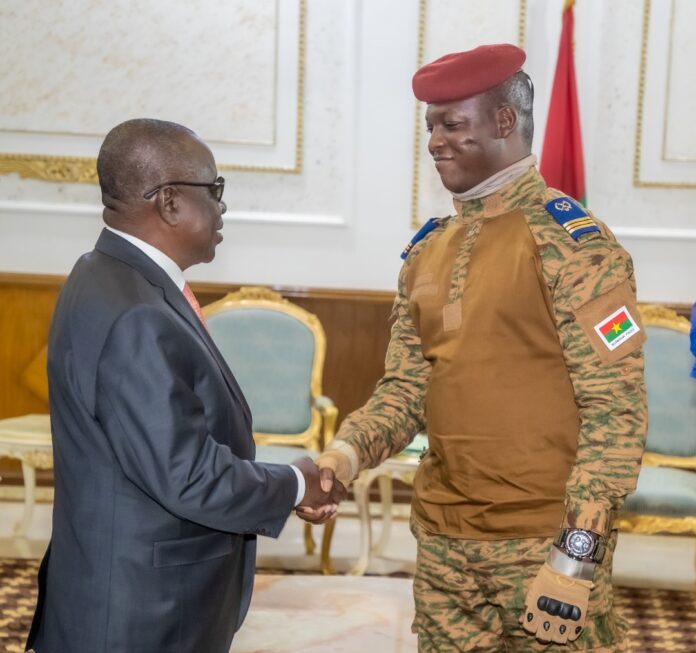 Ghana and Burkina Faso have reaffirmed their commitment to work together in fighting terrorism in the sub-region.

Ghana’s National Security Minister Albert Kan-Dapaah disclosed this to journalists in Ouagadougou on Wednesday 21st December 2022 after conveying a message from President Akufo-Addo to the Burkinabe leader President Ibrahim Traore.

Mr Kan-Dapaah led a high-level delegation from Ghana which also included Security chiefs and officials from the Ministry of Foreign Affairs and Regional Integration.

Flanked by the Burkinabe Foreign Minister Madame Olivia Rouamba, Mr Kan-Dapaah said “the two countries reviewed the strong cooperation between them and clarified to their mutual satisfaction recent reported discussions between Ghana and the United States with regard to the needed partnerships for sustainable peace in the region”

The Minister indicated that both countries have reaffirmed their support for a joint fight against terrorism, welcoming early operationalization of the Accra Initiative to enable Burkina Faso to defeat the terrorists who have brought untold hardship and pain to the Burkinabe people.

“In that respect, we discussed concrete support that Ghana has advocated for Burkina Faso in the Accra Initiative and ECOWAS and called on the West African States to act expeditiously on the matter,” he said.

The two countries also highlighted the importance of building resilience in vulnerable communities and support for those that have been displaced or lost livelihoods and called for genuine partnership with the international community in this regard.

Earlier Mr Kan-Dapaah and his delegation were welcomed by a retinue of religious and traditional leaders.
Together, they reaffirmed the common histories and traditions of Ghana and Burkina Faso and agreed to explore the possibility of periodic visitor exchange with their counterparts in Ghana.