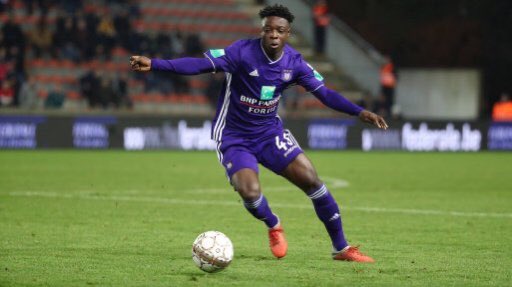 The two Ghanaian youngsters were in the thick of affairs for the Belgian giants as they brushed aside Waasland-Beveren 3-0 away from home in the Belgium Jupiler league.

Doku provided the assist for the visitor’s first goal after beautifully setting up Michel Vlap on the eighth minutes mark to give the away side a perfect start to the game.

The 17-year-old has three assists to his name and has scored once in 20 appearances for Anderlecht in the ongoing Belgium top-flight league.

Six minutes after the hour mark, Vlap scored his second in the evening to make it 2-0 to put the away team in a good position for all three points.

Substitute Amuzu added the icing on the cake when he slotted home the third for Anderlecht from 12 yards to extend his goal tally to three with three assists so far this season.

Waasland-Beveren have now gone six games without a point and find themselves bottom of the league table after their 0-3 defeat to Anderlecht on Saturday.