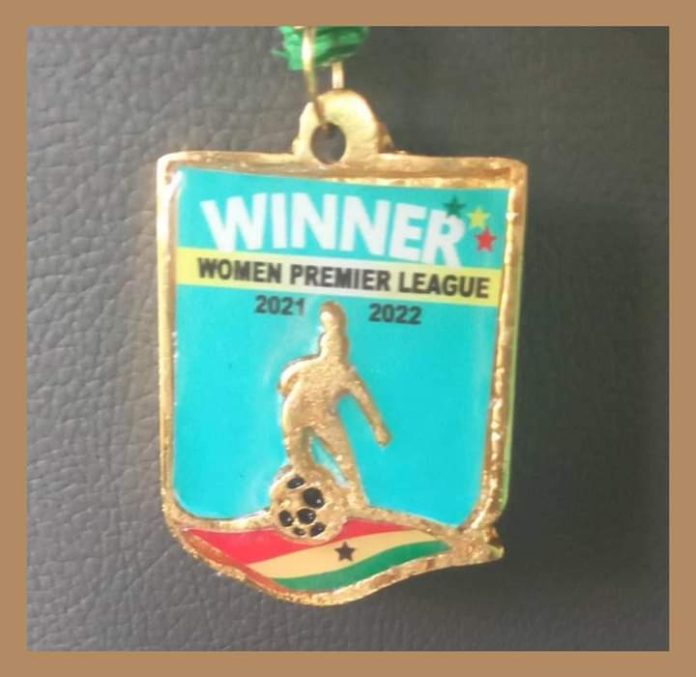 The Ghana Football Association have been severely criticised by both the media and Ghanaian football fans for handing out inferior medals to Ampem Darkoa Ladies after they emerged winners of the 2021/2022 Ghana Women’s Premier League.

The Techiman-based club got the better of nemesis and defending champions Hasaacas Ladies during Saturday’s final at the Accra Sports Stadium.

Ampem Darkoa fell behind in the first half after conceding a penalty which was expertly converted by Hasaacas’ Success Ameyaa.

However, they rallied their way back into the game and restored parity in the 25th minute, thanks to another well-taken penalty by Comfort Yeboah.

Ampem Darkoa then went on to be crowned Women’s Premier League champions after triumphing 5-4 on penalties after 120 minutes of action.

The medals handed out to the champions and runners-up, though, did not enthuse fans who took interest in the game.

Many, therefore, took to the microblogging site Twitter to express their displeasure with the quality of medals given out by the Ghana Football Association (GFA).

After the 2020-21 season ended, same situation was witnessed when Hearts of Oak were crowned Ghana Premier League champions.

The Phobians romped to the league title in July following a perfect season which saw them get the better of their rivals.

Samuel Boadu’s side completed a historic double when they defeated Ashanti Gold on penalties to win the FA Cup.

The medals given to the club for winning the league and FA Cup were, however, of low quality, leading to a backlash by fans.

In the wake of the low-quality medals handed to Ampem Darkoa, conversations have once again erupted over the topic.