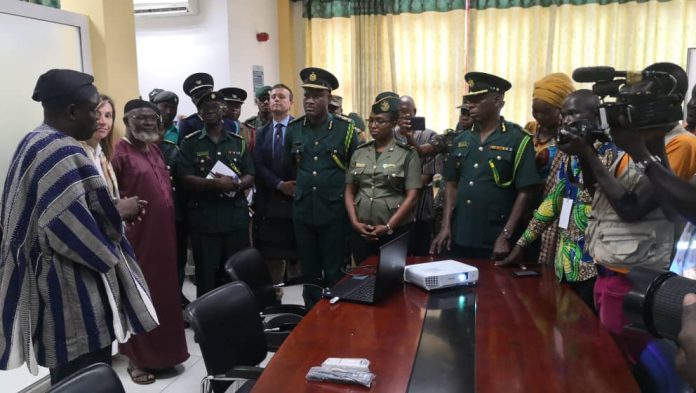 The Comptroller-General of the Ghana Immigration Service, Kwame Asuah-Takyi has begun a 9-day tour and working visit to some GIS installations in the Northern, Upper West and the newly created Savannah Regions.

The visit is scheduled between 30th July and 7th August 2019.

The visit to the Regions would have the Comptroller-General of Immigration (CGI) tour some approved and unapproved routes along the boundaries with Burkina Faso, Cote D´Ivoire and Togo in those Regions.

The tour has become necessary at a time when the Service has deployed a second batch of trained Border Patrol Officers for ´Operation Conquest Fist´ currently underway around the borders in the Northern parts of the country.

The Operation which has been in progress since June this year forms part of measures taken by Government through the GIS and other Sister Security Agencies to beef up security along the borders at those parts of the country.

The CGI´s tour is therefore imperative to enable him gather firsthand information on activities at the borders and be abreast with the operational challenges.

In all, about twenty-five (25) identified places comprising of border posts, GIS Regional and District Offices as well as several unapproved routes are expected to be visited by the CGI.

As part of the tour, the CGI would also pay a courtesy call on the Wa Naa and other Government Officials.

In a related development and as part of the working visit, the Comptroller-General of Immigration in the company of the Spanish Ambassador to Ghana, Her Excellency Alicia Rico Pérez Del Pulgar and the Northern Regional Minister would commission an ultra-modern Migration Information Center (MIC) funded by the Spanish Embassy in Tamale.

The opening of the Tamale MIC is to provide accurate travel information and educate the general public and prospective migrants on safe migration.

The Comptroller-General of Immigration is expected back in Accra on the 8th August 2019.

Water sachet use in Ghana: how to stop the pollution