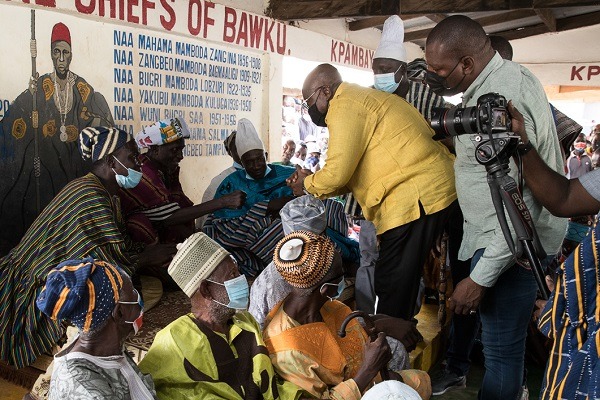 “Ghana was lucky to have you as the Head of State during the period. You have demonstrated beyond reasonable doubt that you are the best among the rest. You have been singled out and praised on the global platform for your show of leadership in that regard. Kindly accept our congratulations.

“Your Excellency, we must show appreciation and gratitude for the free water and light policy your government implemented, which we enjoyed during the Covid-19 period. It has ameliorated the plight of the citizenry which is worth commending.”

These were the words of the Gbang Raana of Bawku, who spoke on behalf of the “Elders of Mamprusi”, on Monday 21 June 2021, when Nana Addo Dankwa Akufo-Addo paid a visit to Naa Zangbeo’s palace as part of his tour of the Upper East Region.

The elders indicated that they have always been adherents of the liberal democracy and the free-market economy concept, adding that “we have also been your staunch supporters and believers of your leadership abilities ever since you declared your intent to lead our great party somewhere 2007.”

“Our support for you and the tradition is unwavering and unalloyed. Our stance has been vindicated considering what your government has been able to do within the constraints for the past four and half years since you assumed office as President.”

Touching on the Bolga-Bawku-Pulimakom Road, the elders told the president that “it used to take us not less than three hours to travel to Bolga. But currently, it takes us one hour to travel to Bolga. We are obliged to show gratitude and to pray for you.”

Additionally, they added that the “Kulungungu bridge, which has been fixed to ease human traffic and enhance foreign trade with our neighboring brothers and sisters at Burkina Faso, cannot pass without mention”.

The elders applauded President Akufo-Addo for his flagship programmes such as Free Senior High School and Planting for Food and Jobs, which, he said, have been well thought through, executed “with a human face”, and targeted to benefit a large number of citizens.

“I state without any shred of contradiction that my people and I are proud to associate ourselves with you on the same political lineage and shall offer you unalloyed support any time we are called upon. We shall state that you have performed creditably well and deserve applauds. But for constitutional injunction, we would have called upon you to lead the party, again and again,” the statement added.

As a result of population growth, they indicated that there is enormous pressure on educational and health facilities in Bawku.

“We should be grateful if a Community Day Secondary School is established in the Bawku Central township to cater for pupils within the catchment area who have to travel either out of town or to far off places to access Senior High Schools. If it is considered, a piece of land for that purpose would not be a challenge. We also need to request a Government District Hospital. The hospital that serves the entire Bawku and its environs is the Presbyterian Hospital which is usually over stressed,” the statement noted.

On his part, President Akufo-Addo thanked the “Elders of Mamprusi” for their continuous support for him and for the work of his government, assuring that more will be done in his second term to help raise the living standards of the Ghanaian people in all parts of the country.

He reassured them of his commitment to addressing their challenges, which includes the construction of a Community Day SHS, and a District Hospital, which, he said, has already been captured under Government’s Agenda 111 programme.