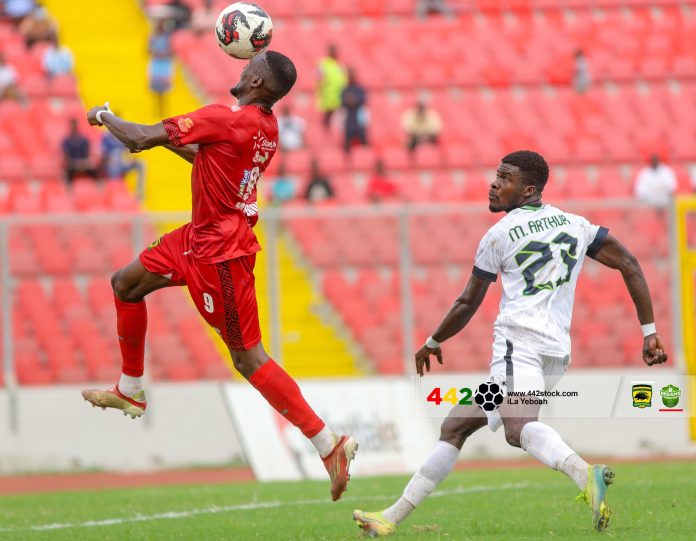 Kumasi aAsante Kotoko defeated Dreams FC 2-0 at the Baba Yara Stadium in Kumasi on Sunday afternoon to start the second round of the 2021-22 season with a crucial win at home.

The Porcupine Warriors were too strong for the Still Believe side who failed to make good use of their chances in the game to record a home and away wins over the GFA President’s team.

Dreams had the best of opportunities to break the deadlock of the match in the first half but their striker Ali Huzaf was just not in the mood to party.

Ali Huzaf had two glaring chances in the first half to score and put the visitors ahead but failed woefully from close range.

After the break, Dreams had another chance to score but fluffed their lines and also came close moments later but Ibrahim Danlad produced another good save as he did in the first half.

The league’s top scorer, Franck Thierry Mbella Etouga was brought down by the Dreams goalkeeper and the Cameroonian elected himself to score the resulting spot kick brilliant.

With nine minutes to the end of the match, Etouga pounced on a lackadaisical defending from the away team to score his second goal after his initial shot hit the upright with a brilliant left-footed strike into the top left corner to make the final score 2-0 to Kotoko.

Kotoko have 40 points from 18 matches and are 10 points clear of Bechem United FC who loss to Medeama SC and sit second with 30 points.