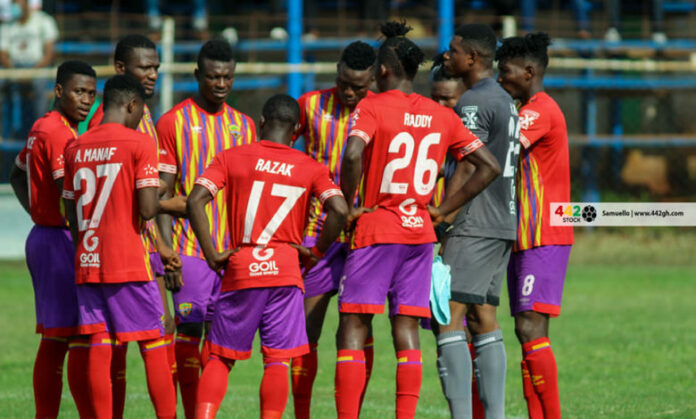 Accra Hearts of Oak SC took a two points lead at the top of the league table after defeating Berekum Chelsea 2-0 in Accra on Sunday night.

The Phobians take a giant step towards winning the Ghana Premier League title for the first time in over a decade since they last won in 2009.

Hard working midfielder, Benjamin Afutu Kortey put the Rainbow Boys in the lead after just nine minutes with a bullet header inside the goal areal following a perfect corner kick from Ibrahim Salifu.

The home team continued with a dominant display after an early lead and kept pushing the Bibires back into their half throughout the first period of the match.

Twenty minutes later after shooting themselves in front, striker Kojo Obeng Jnr latched onto a beautiful through pass from U-20 CAF Championship winner, Daniel Afriyie Barnieh to power home the second goal for the hosts.

After taking a comfortable 2-0 lead into the break, the home team were more relaxed in the second half and allowed the visitors to come into the game but failed to get passed the defense of Samuel Boadu’s team.

Hearts also got some half chances to add more goals in the second period of of the match but could not find the back of the net again as it ended 2-0 to the Accra-based team.

Hearts are now two points above Kotoko who are their closest rival with 49 points from 27 matches this campaign with seven minutes to the end of the season.

Next weekend, the Phobians will face city rivals Accra Great Olympics at the Accra Sports Stadium for a promising mouth-watering game of the 2020-21 Ghana Premier League week 28 clash.