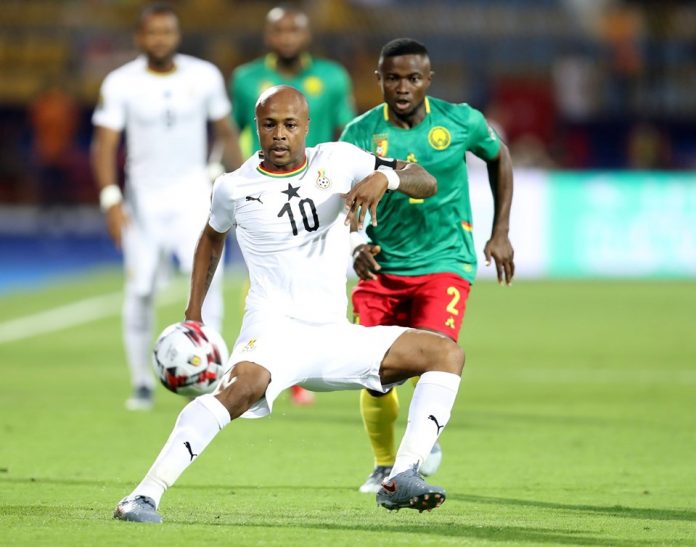 So it ended: a point apiece, yet with Ghana hardly at ease.

Between two teams that share nine Africa Cup of Nations titles — with Cameroon only one better — the margins were always going to be fine and narrow. Ordinarily, there should have been no pressure on either team to win, given the two giants have minnows Benin and Guinea-Bissau for company in Group F.

And maybe Cameroon didn’t feel that pressure, but the Black Stars — having failed to take in the first three of those ‘easy’ six points, courtesy a draw with the Beninese a week ago — certainly did. Ghana trainer Kwesi Appiah had promised a better show, and he set out to deliver it.

The former full-back revised his notes, introduced a couple of players Ghanaians had called for after the preceding fixture, and even dumped the oversized shirt he’d been widely chastised for wearing during the Benin encounter (ever the conservative, though, Appiah chose to be attired in the same yellow Puma-branded team gear as others on his technical team).

There was no concession of an early goal to slap Ghana to life this time. However, by the 15th minute, another setback suffered in the Benin game recurred — only earlier. The circumstances may have been different, but winger Christian Atsu came off wincing just as Thomas Agyepong had in the opener, with pink-lipped Samuel Owusu again rising from the bench to fill the vacated slot.

And while center-back John Boye may have collected the avoidable double booking that left Ghana another starter short and the defence wobbly the other night, his replacement — Jonathan Mensah — helped save Ghana’s bacon on Saturday. If it wasn’t Mensah throwing a leg into a last-ditch tackle, it was his face taking the sting out of a shot aimed at Ghana’s goal. Where either failed, goalkeeper Richard Ofori’s able fists and sharp reflexes kept the ball out.

The Indomitable Lions had worrisome moments of theirs, especially at the very end of the game when Ghana substitute Kwabena Owusu beat Andre Onana — but not the crossbar, crucially — with what must have been his first few touches of the ball. Perhaps, had Owusu rather fed a pass into the path of Jordan Ayew for a surer run at goal, the tale might have had a more favorable climax for Ghana. In the end, a draw proved no fairer outcome than was deserved, although Appiah — who turned 59 on Sunday — reasonably craved more.

“It’s quite unfortunate that we couldn’t utilise our chances, but personally, I was happy with the way the boys played,” he said at the post-match press conference.

“We did our best and missed lots of chances and we were close to winning.”

And win they must against Guinea-Bissau on Tuesday, when Ghana would have to come up with goals — just enough to seal qualification to the next stage or, if they can manage it, a few more to top Group F (though the latter prospect is partly dependent on the result of the other match contested simultaneously by Cameroon and Benin, of course).

Ghana hasn’t suffered a first-round exit at the Afcon since the event was last staged in Egypt 13 years ago, with a loss to Zimbabwe in the final group game tripping the Stars up. Guinea-Bissau — at only its second finals ever and never winning a game — could be that banana peel on this occasion, and the Stars would need to be steadier than they have been in their first two games at the ongoing tournament.

Madagascar beating Nigeria just days ago serves a timely caution to Ghana regarding the possibility of an upset, however improbable, but the comfort with which the likes of Ivory Coast, Senegal and Algeria dispatched relatively smaller opponents on Monday to secure their own progress should provide added inspiration.

Ghana have Boye returning from suspension, but his partner Kasim Nuhu Adams is out for the same reason, while stand-in Mensah has injury concerns yet to be settled. Atsu and Agyepong won’t feature, for sure, and another omission could be skipper Andre Ayew who still nurses an injury from the bruising battle with Benin.

With all those in mind, Appiah gets to shuffle tactics and personnel, as Ghana’s admittedly stretched reserves is still sufficient to snuff out whatever threat Guinea-Bissau would pose. A win is the primary objective, hopefully one that makes a statement. And, as an extra goal, it would be hoped that — for once — Ghana emerges without any casualties when if they qualify.