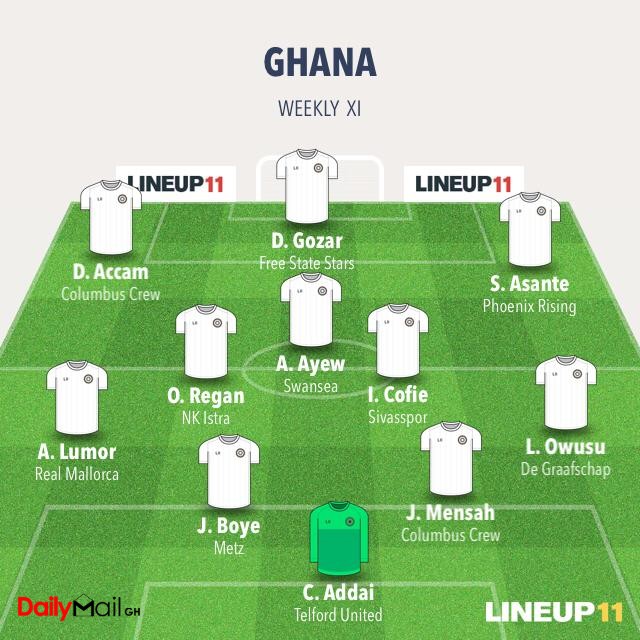 It was a great week for Ghanaian players across the globe with top notch performances and goals all over.

Dailymailgh.com brings to you our Ghana best 11 abroad for the week – August 12 to 18.

Despite Telford United losing by three goals to one to Kings Lynn Town, the former Arsenal youth team keeper made some stupendous saves for his side over the weekend.

Owusu was in good shape at right back. He was very dominant at the right rear as he defended gallantly and joined the attack on numerous occasions as his club went away to beat MVV 3-0 in the Dutch Eerste League.

It was a superb debut from the Black Stars defender who is on loan from Sporting Lisbon. The enterprising defender was able to put the brakes on the Eibar wingers and twice broke loose on the left with fantastic runs.

The experienced centre back formed an impregnable partnership with Stopila Sunzu at the back as Metz walloped Monaco 3-0. Boye marshaled the back four so well to ease pressure on his goalkeeper.

Mensah was at his usual best for Columbus Crew as they drew 2-2 for the second time in a row. The towering defender was able to hold the Toronto FC attackers at bay for a major part of the game. He was booked in the 61st minute for a bad tackle.

It was a dream Superlig debut for the experience enforcer at the Yeni Sivass Stadium against giants Besiktas. Cofie sat in front of the back four and did all the dirty work as his side won by three goals to nothing.

The petit winger became the all time leading scorer for Phoenix Rising with 32 goals as he scored a brace in tbeir 4-2 win over Reno 1868 FC. Asante netted to second half penalties and he is now on top of the goalking chat this season with 18  goals.

The left footed central midfielder was the star at the Aldo Drosina Stadium despite his club losing 3-2 to Slaven Belupo. Regan scored in the 35th minute after being beautifully set up by Mario Cruze and was a delight to watch throughout the encounter.

The newly signed Free State Stars striker was on target on his league debut despite his side losing 3-2 away to Ajax Cape Town. Gozar tormented the Ajax back four and they were unable to contain him throughout the game.

The Ghana skipper scored twice against Northampton Town in the Carabao Cup after coming on from the bench and put up another superb performance again at the Liberty Stadium as Swansea beat Preston North End by three goals to two in the Championship on Saturday.

The Ghanaian winger was on the score sheet for Columbus Crew as they drew 2-2 at home with Toronto FC. Accam who caused serious problems for the Toronto lateral defenders scored in the 82nd minute from a quick counter attack initiated by fellow country man Harrison Afful.

Akufo-Addo hasn’t been rushed for medical treatment at Nyaho Clinic –...