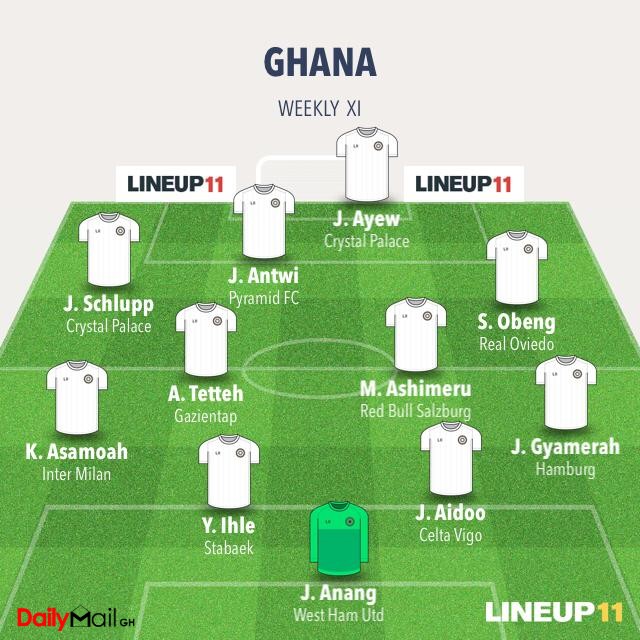 It was an outstanding week for Ghanaian players all over the globe with superb performances and some classy goals. Dailymailgh.com brings you our official Ghanaian Players Abroad Team of the Week.

The budding goalkeeper was in his elements at Old Trafford as West Ham Under 23 went away to draw 2-2 with Manchester United Under 23 in the Premier League lI. Anang pulled some spectacular saves which kept his side in the game.

It was another extraordinary performance by the new Hamburg signing as he was superb on the right rear. Gyamerah who is of Ghanaian and German parentage defended well and moved forward as his side humiliated Hanover 96 by three goals to nothing at the Volksparkstadion.

Operating in a left wing back position in Antonio Conte’s 3-5-2 formation, Asamoah did not only enjoy moving forward, he tracked back and played as an orthodox number three when his side were defending. He was key for Inter in their 2-1 away win over Calgliari.

The experienced centre back was solid for Stabaek in the Norwegian topflight as they defeated Stroemsgodset by two goals to one. Amankwah was the main man at the back of Stabaek as he helped to keep the opposing attackers at bay.

The former Inter Allies skipper was instrumental for Celta Vigo as they went away to draw 1-1 with Sevilla at the Ramon Sanchez-Pizjuan Stadium. Aidoo kept his composure at the back and showed real class as his club recorded a good scoreline in the fierce encounter.

Tetteh was the engine of the Gaziantep team as they went away to draw 1-1 with Sivasspor. The tireless enforcer sat in front of the back four and did all the dirty work as the attacking players moved forward.

The 22-year-old operated on the right side of attack and put up a superb performance as Real Oviedo II defeated Langreo 2-0 in the Spanish Segunda B. Obeng was the man of the match as his two goals secured his side the win.

It was a great full start for Ashimeru as he was key for Red Bull in their 5-1 mauling of WSG Swarovski Tirol. The Ghana youth international netted his club’s first goal in the 12th minute and was instrumental throughout the game.

Antwi was the hero for Pyramid FC as his brace against Haras El Hadood sent them to the semi finals of the Egyptian Cup. The mercurial striker netted his first goal through a penalty in the 43rd minute before completing his double with a powerful strike in the 70th minute.

The in-form striker was the hero at the Selhurst Stadium as his solitary strike gave Crystal Palace all the three maximum points against his former club Aston Villa. Ayew who was on top of his game nutmegged two Villa defenders on the left side of attack after a sweet pass from Jeffrey Schlupp before placing the ball past goalkeeper Tom Heaton for the match winner in the 73rd minute.

It was a master class performance from Schlupp as he set up a goal for Jordan Ayew for the second successive league game. Schlupp was brilliant on the left wing with fabulous passes and was able to track back and help the defence.

Why I concealed my son for 3 years – KiDi explains