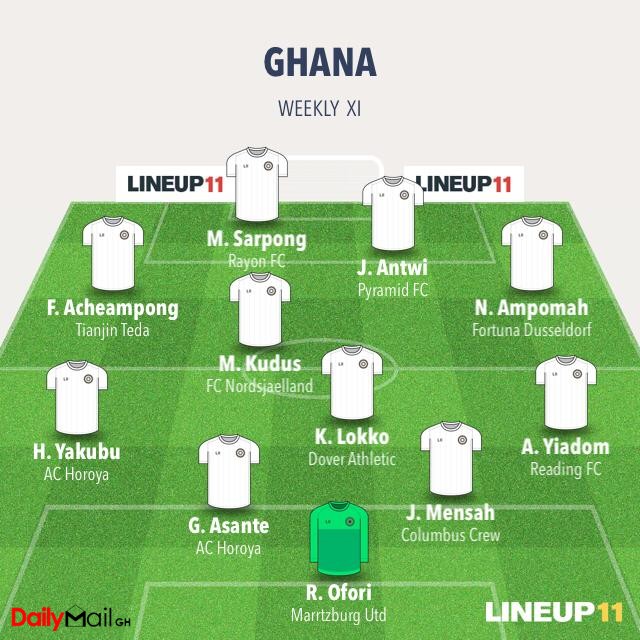 It was a great week for Ghanaian players abroad with many of them scoring in continental club competitions and domestic league whilst others also put up solid performances.

Dailymailgh.com brings you our weekly Ghana Players Abroad team of the Week selection.

The Maritzburg skipper was the hero for his side once again as he pulled some stupendous saves in his side’s 1-1 draw at home with Highlanders.

Despite Reading’s 2-1 away defeat to Hall, Yiadom was one of the fantastic players on the day. He defended well and also surged forward to join the attack with his marauding runs. He was substituted in the 90th minute.

The AC Horoya left back is gradually carving a niche for himself as one of the enterprising lateral defenders on the African continent. He was immense for the Guinean Champions as they went away to draw 1-1 with Stade Malian in the CAF Champions League.

The towering central defender was the hero for AC Horoya against Stade Malian at the Modibo Keita Sports Stadium in the CAF Champions League game on Saturday. Asante who was solid at the back netted the opener for Horoya in the 48th minute before the home side pulled even in the 87th minute.

The experienced centre back was resolute for Columbus Crew in the 2-2 draw with FC Cincinnati. Mensah defended gallantly and kept the Cincinnati attackers at bay for most part of the game.

Dover Athletic manager Andy Hessenthaler deployed a three-man midfield against Wrexham in the conference league with Lokko who is the skipper of the side just sitting in front of the back four. The English-born Ghanaian enforcer did all the dirty work as the other midfielders moved forward in the 2-1 win.

The mercurial winger continued his fine form for Fortuna Dusseldorf by scoring in the German Cup against FC 08 Villingen. Ampomah was unplayable on the flanks and caused serious problems for the Villingen defenders.

The left-footed offensive midfielder scored for the second successive time for FC Nordsjaelland in the Danish Superlig. Kudus started Nordsjaelland revival against Silkeborg in the 52nd minute with a stunning strike after they had gone down 2-0 in the first half. Fellow Ghanaian Francis Abu scored later on in the game to make it 2-2.

The Ghanaian goal assassin netted a brace for Pyramid FC in their 4-1 demolition of Etoile Du Congo in the CAF Confederations Cup game at the June 30 Stadium in Cairo. Antwi who led the attack of the Big Spenders was a source of worry for the opposing defenders as they couldn’t contain him throughout regulation time.

The Rayon Sports Club player of the season award winner was on target against Al Hilal in the CAF Champions League. It took just 20 minutes for the in-form striker to net his first goal of the competition before Hilal equalized later on.

The pacy Ghanaian winger was the star of the day for Tianjin Teda in their 2-1 win over Wuhan Zall in the Chinese Super League. Acheampong connected Rong Hao’s cross in the 69th minute for his club’s second goal in the high tempo game.