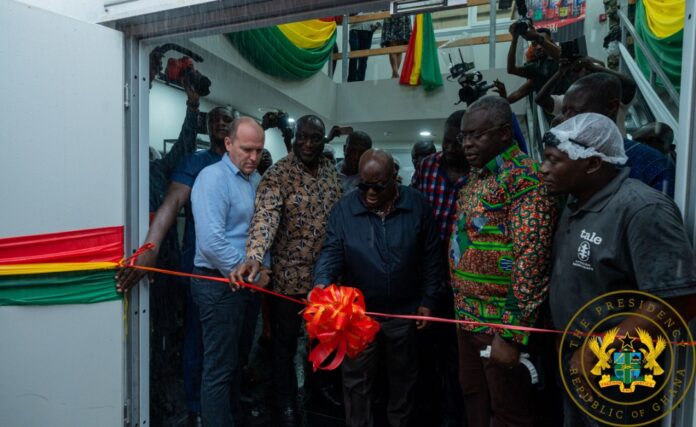 Located in Kwasi Tenten, in Nsawam Adoagyiri Municipality of the Eastern Region, on a five-acre land, Specialty Beers was established to manufacture specialty ‘ale or top fermented’ beers for the Ghanaian market.

The company was registered in Ghana in 2012, but became active in 2020 and applied in January 2021 to take advantage of the One District One Factory (1D1F) programme being implemented by the Ministry of Trade and Industry. Construction of the factory started in May 2021 and the first brew test run was completed in April 2022.

SBL is a medium size craft brewery with annual production capacity of 10,000 hectolitres.

As part of SBL vision to reduce dependency on importation of raw materials, the company has already invested in the development of a number of beer recipes using mainly adjuncts (such as maize and broken rice) partly replacing malted barley which cannot be sourced in Ghana.

A number of local suppliers of these cereals, including Avnash Limited and Hila Farms, Limited have been engaged as anchor suppliers of basic raw materials.

The brewery will be the first to introduce top fermentation brewing process in Ghana. This high-end brewing technology allows the usage of over 70% un-husked grains during the mashing process while ensuring absolute clarity of the beer without stripping any flavour or aroma due to the centrifuge filtration system.

The entire production process of the state-of-the-art production facility is environmentally friendly and utilises only recyclable materials (no plastics). In addition, the company uses cleaning chemicals that allow the wastewater (by-product) to be used as fertiliser and potassium acetate.

Currently, the company has engaged 20 permanent staff who are involved in the pre-factory launch activities in specific areas of factory operations. It is expected that once the company starts full operation, over 60 additional staff would be directly engaged whiles about 1500 indirect employment opportunities will be generated.

The second phase of the project is intended to develop exports to the wider ECOWAS region, rest of Africa and possibly the European market via specialized international distributors. For this reason, Specialty Beers Ghana Limited has already acquired ECOWAS Trade Liberalisation Scheme Certification (ETLS) certification.

Thus far, the One-District-One-Factory initiative, which has seen the ongoing construction of two hundred and ninety-six (296) factories across the country, of which one hundred and twenty-five (125) have been completed, is part of the foundation on which the Akufo-Addo Government is we are building a comprehensive industrialization programme, inspired by the development of strategic anchor industries, such as the emerging automotive industry and the co-ordinated exploitation for the entire domestic value addition of our bauxite and iron ore resources.

In the Eastern Region alone, there are 17 completed 1D1F enterprises, with 16 more under construction and four in the pipeline.

Traders and transport operators give government feedback on mitigation measures