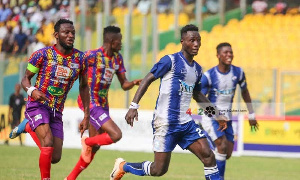 Accra Great Olympics FC flogged their rivals Accra Hearts of Oak at the Accra Sports Stadium on Sunday afternoon in their week 33 clash.

The Phobians could not find antidotes to Olympics threats and eventually succembed to heavy defeat against the Blue and Whites outfit in the Ga-Mantse derby.

Olympics played better than the Rainbow Boys throughout the game and created a lot of chances in the game against a tame Hearts of Oak SC team who were very shambolic in possession.

On the 19th minute mark of the match, Amos Acheampong’s cool finish gave the home team a deserving lead on the balance of play in the opening minutes of the match.

Hearts tried finding their way back into the game but failed to create enough as they made three changes in the first half of the match.

Nonetheless, it was Olympics that got themselves another goal on the 32nd minutes mark through Razak Yussif before the break.

Hearts couldn’t find a way back into the game despite coming close to scoring on one or two occasions but were denied by the Olympics goalkeeper who was brilliant on the day.

Razak sscored again late in the match to put the game beyond the reach of the Phobians who have now gone three games without a point.

3-0 it finished in Olympics favour as they got a sweet home and away wins this 2021-22 season in the Ghana Premier League over their rivals.

Edward Adeti writes: Soyinka, Anas, the Partridge and the Poacher

I will grant amnesty to jailed small-scale miners – Mahama