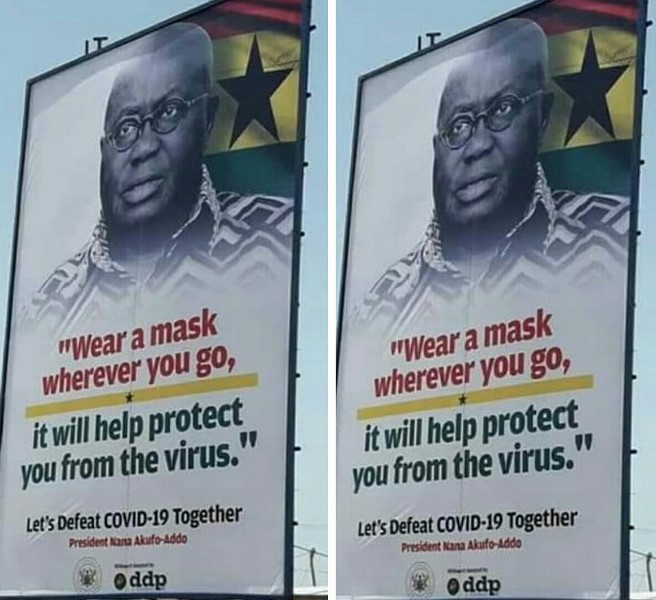 So whose idea was the Covid-19 outdoor display above? They have issued a disclaimer of sorts, but many questions are still begging for answers. Are they telling me that client and agency did not meet to analyse image and copy before it was signed off? For such things, there’s always a paper trail. And for such a major government-related media activity to have gone out without anyone in government having had a hand, tells a very disturbing story of how Ghana is being run. Kojo Oppong Nkrumah had no idea? The national task force on Covid-19 had no idea? The staffers scurrying in and out of government house had no idea?

Disclaimer or not, it is still worth discussing: For starters, the face is unconvincing as one trying to win people over. The eyes, magnified as they are behind the glasses, make the subject look startled and belligerent. And even more damaging is the face extolling the virtues of wearing masks but without wearing one himself to prove the point – the main bone of contention. This is an advert that would have failed to communicate. Instead would have opened Covid-19 to ridicule – integrity therefore, zero. The image was first forwarded to me on WhatsApp with this message: “What kind of President is this? He says things he never does. Where is your mask Mr. President?”

But wait for this one from another source – an advertising professional: “Because of their desperation to do politics, they defy all basic logic in communications to show their candidate! Presumably he may not be identifiable with a mask on – he may be mistaken for an armed robber!” So you see, instead of inspiring us to wear masks, it has become the butt of jokes! That really is what that outdoor display is all about. A political point scoring caper that has backfired or misfired. So what if they had the image with a mask, would they have issued a disclaimer? Of course they would have owned it with pride.

I am rather surprised, because ddp is one of the most experienced advertising/marketing agencies in Ghana and they did not notice the no mask gaffe. To have exhibited such incompetence and elementary lack of vision in such a crucial brief is most disturbing. Whatever it is, it sent the true message: Nothing to do with Covid-19 and everything to do with Election 2020 politics. Period!

The attempt to dissociate the government from this billboard is laughable. How long have the billboards been up? A week? Who would spend so much money to print and erect such huge outdoor displays without the authorisation of someone in authority? Note: “We appreciate all who seek to help Govt communicate at this time. But please do well to engage with Govt on imaging and messaging,” Mr. Oppong Nkrumah’s disclaimer said. The truth is, Mr. Akufo- Addo has been mask-shy until the past few days!

If he was serious he should be seen in the mask many times. It is the backlash that is forcing the dissociation. After all, this is not the first one. One of the Accra MPs has also erected huge billboards showing Mr. Akfo-Addo on Covid without a mask…

I know politicians would often ride on the backs of events to advance their agenda, but when they “try too much” they often end up with such goofs. I recall when the Dagbon interregnum was sorted out, they hurriedly erected similar billboards extolling not the Otumfuo Asantehene for midwifing the peace process but Mr. Akufo-Addo whose picture was displayed with Ndan Yan Naa’s, claiming that “Dagbon thanks you Mr. President”.

If they thought they were gaining political points for Nana Addo, some of us Dagombas found it extremely offensive. It may have seemed smart for them to put up such billboards, but to many, it did not communicate and may even have entrenched positions. What Dabon needs after the denouement is a long period of peace, quiet and non-partisan politics. It was therefore most insensitive and unhelpful to us Dagombas. After all the original sin was stoked by politicians when during the watch of the NPP, Ndan Yan Naa Yakubu Andani II was brutally murdered.

They should not drag Covid-19 into their politics of exclusion. If there had been a genuine patriotic goodwill behind the billboard, whoever put it up would have included the images of Presidents Rawlings, Kufuor and Mahama all in masks – not difficult to achieve…See what I am talking about?

By Amb. Alhaji Abdul-Rahman Harruna Attah, MOV | The views expressed by the writer are solely his and do not represent the position of Daily Mail GH

Arrest warrant issued for ‘MP’ who killed girl, 15, in Kumasi