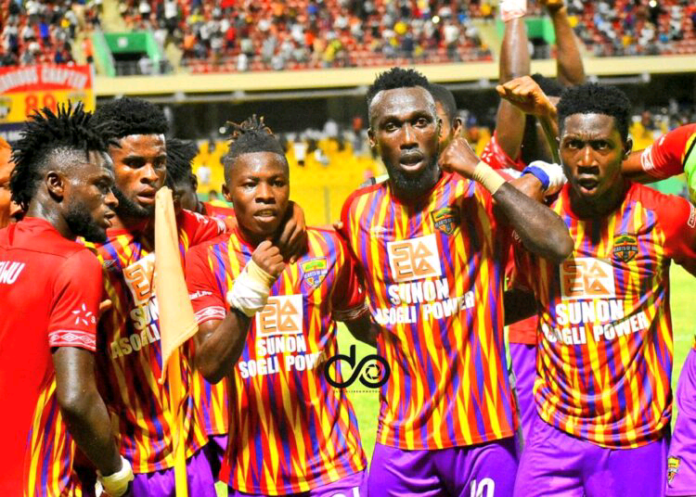 The Phobians got a perfect revenge against the Yellow and Mauves from Tarkwa with a hard earned 2-0 home win to go three points clear Asante Kotoko at the top of the league table.

Midfield-gem Salifu Ibrahim struck first to put Samuel Boadu’s team in the lead against his former club when his tame effort on the 41st minute mark went past Frank Boateng to make it 1-0.

On the 21st minute mark, striker, Kojo Obeng Jnr failed to make the most out of his chance to put the hosts ahead as Frank Boateng made a close range save.

After the hour mark, Emmanuel Nettey’s set piece from the left side of attack was not properly dealt with by the Medeama defence and Benjamin Afutu rose highest in the box to power the ball home with a bullet header for his 5th league goal of the season.

Both coaches introduced new faces after Hearts second goal but the job was nicely executed by the Rainbow Boys who held on to win their fifth game in their last six matches.

First goal getter, Salifu suffered an injury following a bad tackle on him by Medeama’s diminutive midfielder Rashid Nortey and was replaced by Umar Manaf 4 minutes from time.

Hearts will next play as an away team at the Accra Sports Stadium on next weekend to Legon Cities FC who beat the Phobians in the first round of the 2020-21 Ghana Premier League with a slim 1-0 win.