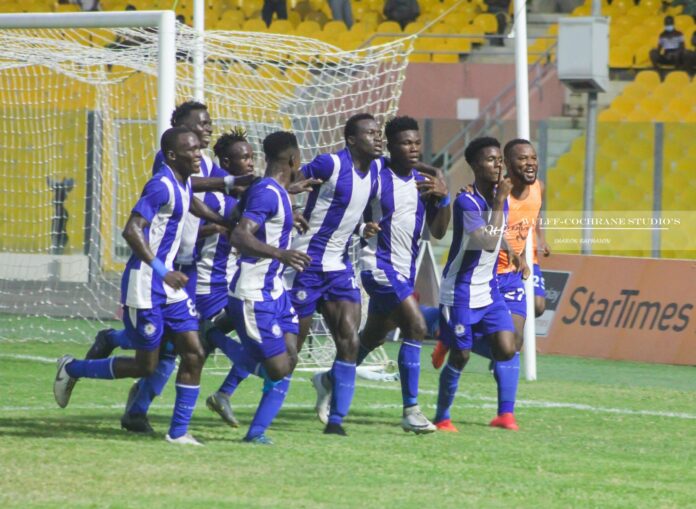 The GA-Mashie derby played at the Accra sports stadium on Saturday night between Accra Hearts of Oak and Accra Great Olympics and it was Accra Great Olympics produced a masterclass first half performance from the DADE Boys as they took a commanding and deserving 2-0 lead before the interval.

Young forward, Maxwell Abbey Quaye drew a questionable foul from Hearts of Oak defender Nuru Sulley on the edge of the box and skipper of the side Gladson Awako superbly scored directly from the freekick in the 13th minute for his fourth league goal of the season before Abbey Quaye made it 2-0 just after five minutes with a brilliant and a sumptuous finished on the 18th minute mark.

Abbey could have scored a brace in the 78th minute as his effort went just over the crossbar as Hearts of Oak hit the woodwork twice through the efforts of Emmanuel Nettey and Patrick Razak.

Interestingly Abbey Quaye was assisted by his brother Samuel Quaye who played as a right wing back for Olympics in this game. Samuel’s cross from the right side into the area found Abbey who was unmarked in the box and the striker delivered a powerful volley that beat goalkeeper Richmond Ayi. The goal represent the fourth realization of Abbey Quaye this season.

The Phobians were wasteful as usual as they failed to convert the numerous half and clear chances that came their way especially in the second 45 minutes of the match.

Hearts of Oak coach Kostadin Papic replaced Nettey – who was making an injury comeback in this game and failed to make any significant impact – with Benjamin Afutu in the 48th minute and forward Isaac Mensah also took the place of Patrick Razak in the 69th minute as the Phobians struggled to breach the goal of goalkeeper Saeed Salifu.

Parts of the floodlights at the Accra sports stadium went off in the 54th minute but it did not take long for them to be restored as the game continued from the 56th minute with Hearts of Oak taking a corner kick.

The Phobians who won the last fixture by 4-0 could not match their performance on Saturday and Great Olympics – coached by former Hearts of Oak player Yaw Preko and assisted by Godwin Attram – marched on to claim another big win after defeating Asante Kotoko at the same venue this season.

Olympics moves to third on the league table with 18 points from 11 games whiles their rivals Hearts of Oak declines to fourth position after 11 matches with 16 points.

Olympics host King Faisal FC next weekend in Accra as Hearts travels to play Medeama SC in Tarkwa in the week 12 of the Ghana Premier League 2020-21 campaign.

Opinion: Can any ordinary citizen of Ghana scandalise the courts, apologise...