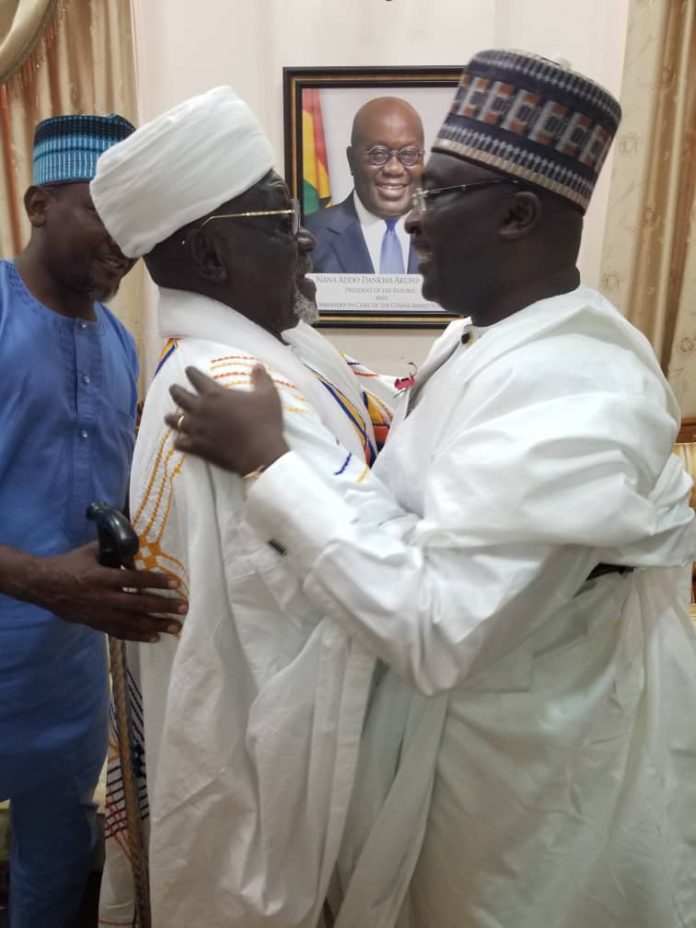 In a great show of solidarity and brotherhood, the leadership of the Muslim community of the Western Region has succeeded in bringing the issue of Sheikh Abdul Karim Yusuf to the attention of the Vice President, Alhaji Mahamudu Bawumia.

This happened on Friday with the support of the Western Regional Minister, Hon. Kwabena-Okyere Darko Mensah.

The Sheikh has been bedridden for months at the Effia Nkwanta Hospital undergoing dialysis three times a week. A fundraising was launched to help raise an amount of thirty-six thousand dollars ($36 000.00) to help fly him to India for kidney transplant.

“Our brother and son is in a serious condition and needs urgent support. We are therefore here to appeal to your good self to help for his treatment,” he pleaded.

The Regional Chief Imam went on to tell the veep about the peaceful co-existence of the Ahlussunna and Tijaniya sects in the region, “Unlike other regions where they do not see eye to eye, the two sects have a wonderful relationship in this Region. This is the reason why you see us all together with our chiefs fighting to regain the health of one of our own,” said Ustaz Ali.

The delegation was made up of officials from the Office of the Regional Chief Imam, that of Ahlussunna Wal Jamaa, leadership of Council of Muslim Chiefs and other opinion leaders.

In response, the affable Vice President assured the Chief Imam of his commitment to help the ailing Imam. “In shaa Allah I am going to take up the full cost of the sheikh’s medication in India,” he assured the delegation.

He assured them that latest by tomorrow everything will be ready for the taking.

This information sent the whole delegation as well as the entourage of the Vice President into choruses of ‘Allahu Akbar’, whilst they all shook hands happily and pat each other on the back.

In an exclusive interview with the Chief of the Songhai community of the Western Region, Alhaji Habib Yusuf Wangaro, he commended the Vice President for his swift positive response to their plea for help. “The Vice President has really demonstrated his love for his people, I pray for Allah’s blessing on him.” He beamed.

He went ahead to heap commendations on the Regional Chief Imam and all the other dignitaries that rallied around the Ahlussunna at this time of need.

All things being equal, Sheikh Abdul Karim Yusuf will be flown to India before next weekend.