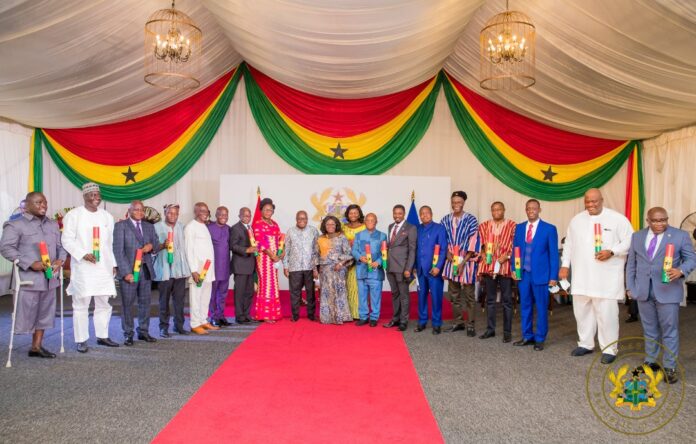 President Akufo-Addo has charged all 16 regional ministers to ensure that they maintain total security, peace, and order in their respective regions where they are to serve.

The president gave the regional ministers the charge when he addressed them at the Jubilee House on Thursday the 11th of March 2021, at a swearing-in ceremony where he administered three oaths – the Oath of Allegiance, the oath of office, and of secrecy, to them.

“As Chairpersons of the Regional Coordinating Councils of your respective regions, you have the most regular and direct impact on the lives of the people. You set the tone for the administration and development in your regions. Another important role you play is that of the chair of the Regional security council. You do not need me to tell you that your most important function is to help ensure peace, law, and order in your regions” President Akufo-Addo stated.

“All our plans and programs will come to naught if there is no peace. You must be careful and tactful in managing issues of intelligence and security” the President added.

“Article 256 of the Constitution of the Republic, outlines your responsibilities succinctly. You represent the President in the region, and you are responsible for the coordination and direction of the government administrative machinery in the Region. As you all already know, I have taken the decision not to appoint deputy regional ministers, this means you have to shoulder the work by yourselves as I know you can,” Akufo-Addo said.

Dr. Archibald Yao Letsa, the Minister responsible for the Volta Region, in response to the charge of the President on behalf of his colleague regional Ministers, indicated they will do everything within their power to support the vision of the President aimed at bringing development to every one 9f the sixteen (16) regions of the country.

“We want to assure his excellency, the good people of Ghana and our regions that we shall take this assignment with seriousness, dedication, commitment, and loyalty that it deserves. Mr. President, on behalf of my colleagues, I promise that you can always count on us. We will be your worthy representatives in all the sixteen regions of our beloved nation, Ghana,” Dr Letsa noted.

How bamboo from Ghana ends up as trendy German bicycles