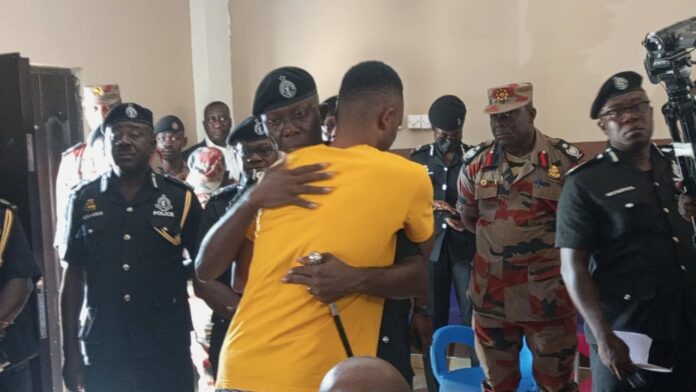 A fire swept through an apartment at Apromoase, near Ejisu in the Ashanti Region, killing a policeman, his wife and their four-month-old baby.

The deceased officer Sergeant Owusu Asante Baafi and his family got trapped in their two-bedroom apartment in the building which houses police officers.

Firefighters were called to the scene to battle the blaze.

“I heard a noise and so I woke up and saw smoke in my room. So I woke up my two children and came out of the room. The deceased got trapped and all attempts to save them yielded no results”, one of the surviving victims told reporters.

“I am only left with what I am wearing, all my properties have been destroyed”, she said.

The Assemblyman for Apromase electoral area, Ernest Kwarteng indicated that the incident occurred at around 11:40 pm on Sunday evening. He said authorities have begun investigations.

“Firefighters from Ejisu came and then another was deployed from Oforikrom unfortunately, the family is gone. Investigations have started”, Kwarteng told reporters at the scene.

“We are just seeking some support from the general public because it is a difficult time for these affected young officers”, he added.

Baafi, 35, until his death was with the Anti-robbery Unit at the Ashanti Regional Police Command. The charred bodies have been deposited at the Living Waters Morgue at Krapa in the Ejisu Municipality, for preservation.