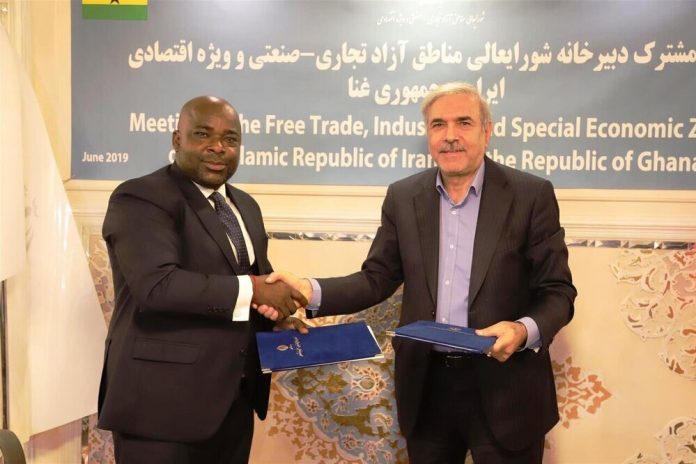 The MOU was signed by the Secretary of the Supreme Council of Iran’s Free Trade, Industrial and Special Economic Zones Morteza Bank and GFZA Executive Secretary Michael Okyere Baafi in Tehran.

Speaking in the signing ceremony, Bank referred to the Iranian free trade zones’ capacities in developing the country’s economy, saying “mutual economic cooperation between free trade zones of Iran and Ghana can provide African countries’ access to a wide range of products in the region and pave the way for boosting trade exchanges.”

He added that participating in international exhibitions is one of the ways for showcasing potentials of the country’s free zones.

He further suggested creating a joint exchange context between the two countries’ free zones since it can prepare electronic trade based on digital currencies.

In the meantime, deputy head of the Supreme Council of Iran’s Free Trade, Industrial and Special Economic Zones for cultural, tourism and industry affairs, Mohammad Reza Rostami, referred to capabilities of Ghana and the African continent in cultural and art fields.

Okyere Baafi arrived in Tehran on Friday to hold talks with officials of the Supreme Council of Iran’s Free Trade, Industrial and Special Economic Zones and to visit Kish Free Zone in south of Iran.