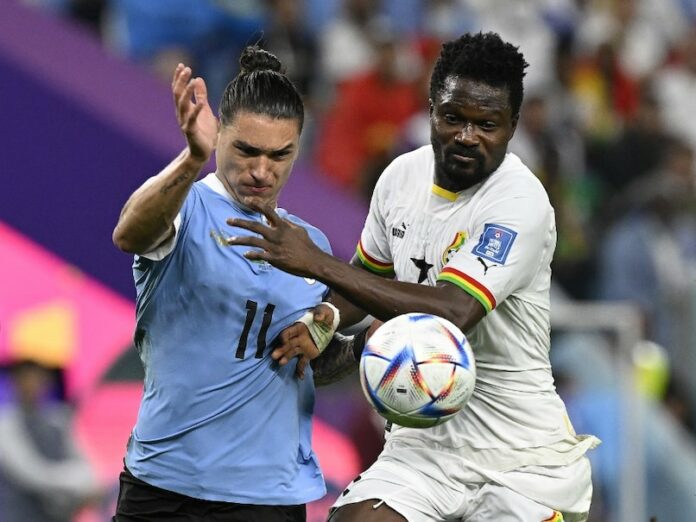 Ghana and Leicester City defender Daniel Amartey has said that it was important for him to stop Uruguay from progressing to the knockout stages of the FIFA World Cup. Uruguay failed to qualify for the round of 16 after falling behind South Korea on the basis of goals scored, even after beating Ghana 2-0 in their final Group H match.

Speaking after their defeat, Amartey said he told his teammates that if Ghana doesn’t go to the knockout stages then Uruguay also doesn’t go.

Asked if it was important to deny Uruguay a place in the round of 16, Amartey said yes.

“For me, yes. It was tough because you can see their centre back, everybody comes (forward). Uruguay needed one goal to go through and you can see we defend four against five or three against two but we managed to defend,” Amartey added.

The Leicester City defender said that match could have looked different had Andre Ayew scored his penalty kick.

“It is football, it happens. If we score that penalty I think we kill them but we miss the penalty and you can see the game changed,” said Amartey.

South Korea scripted a stunning comeback to beat Portugal 2-1 and give themselves a chance to progress to the Round of 16. However, they had to wait for the other Group H match between Uruguay and Ghana to end to lean their fate. South Korea’s game finished early and eight minutes of stoppage time was added to the other tie.

Meanwhile, Uruguay beat Ghana 2-0 but failed to qualify for the last-16 stage having scored lesser amount of goals compared to South Korea.

Use your pulpits to preach peace, unity – Bawumia to religious...