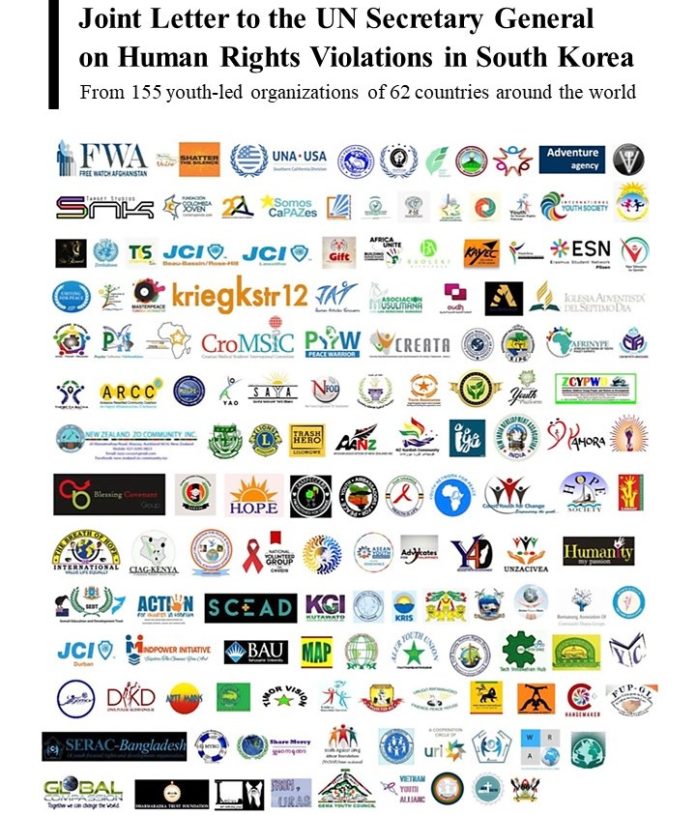 On August 10th, 155 youth groups with one million members from 62 countries around the world sent a joint letter to the UN Secretary-General António Guterres and the UN affiliates, including the UN Office for the Coordination of Humanitarian Affairs (OCHA) and the Office of the UN High Commissioner for Human Rights (OHCHR).

The representative of this letter, the director and founder of FREE WATCH AFGHANISTAN, Mobeenullah Aimaq, said that he agreed with the UN’s concern for the persecution of minorities and vulnerable groups as well as human rights violations that continue to occur in the pretext of fighting the coronavirus. To solve this problem, he proposed a joint letter to young people around the world to appeal to the international community.

In the letter, they reported the several acts of unfair discrimination and oppression of the Korean government and the media against these organizations by citing the concerns of UN Secretary-General regarding “disproportionate effects on certain communities, the rise of hate speech, and the targeting of vulnerable groups”.

According to the report, there have been over 5,500 instances of human rights abuses of members of the Shincheonji Church during this period of the ongoing pandemic. Among the cases include two female members’ death in suspicious circumstances. Many of these victims are promising young people who are now facing increased discrimination in workplaces and schools, violence at home, and even forced deprogramming.

The letter highlights that the members of Shincheonji Church are also victims who were unfortunately infected with the virus despite following the government’s guidelines related to the pandemic.

Furthermore, the unprecedented custody investigation against 89-years-old Chairman Man Hee Lee of Shincheonji Church and HWPL was recently determined. The charters of these two groups have been revoked by the government and they have been subject to rigorous tax investigations. Those in leadership positions within the organizations also have been taken into custody for questioning.

In the Korea Times column titled “Can unpopular sect expect justice?”, Michael Breen, CEO of Insight Communications, referred the current investigation into Shincheonji Church as a “witch-hunt” by saying that Shincheonji is a safe target for politicians and others who comment in public since it is unpopular.

In the joint letter, they urged that cases of human rights, social and religious repression, such as the ones occurring in South Korea, must be put to an end in order to build “more effective and inclusive solutions for the emergency of today and the recovery for tomorrow.”