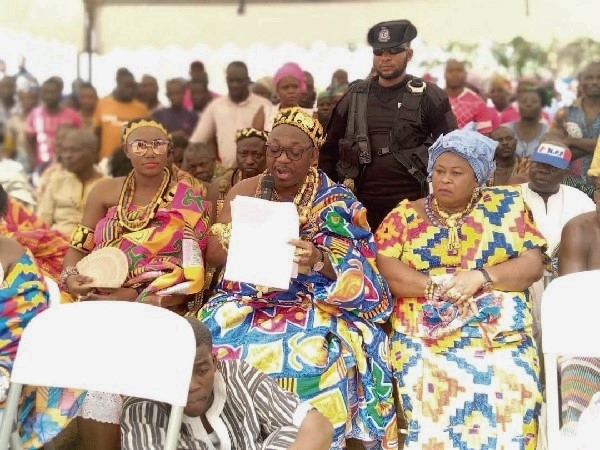 Justice Clemence Jackson Honyenuga, who is sitting on the case involving the former Ghana Cocoa Board boss, Dr Stephen Opuni and businessman Seidu Agongo, has sparked social media rage over his declaration of support for President Akufo-Addo, during his tour of the Oti and Volta regions.

The Opuni case has been cited among the cases the Akufo-Addo government is prosecuting against appointees of John Dramani Mahama, as a testimony of the corruption which existed under the erstwhile National Democratic Congress (NDC) government.

The Court of Appeal judge, who is presiding over the case as additional High Court Judge, had declared support for President Akufo-Addo and the New Patriotic Party (NPP), in his capacity as the Paramount Chief of the Nyagbo Traditional Area, Torgbui Ashui Nyagasi V.

But it is becoming increasingly difficult for some people to separate his traditional role and authority, from his professional duties as a judge, which requires him to be neutral and apolitical.

The state-owned Daily Graphic newspaper, had quoted him as calling on Ghanaians to give President Akufo-Addo, another term to implement his vision for the country.

“We wish to congratulate you for the excellent manner you are governing this dear country of ours, it is our hope that with your vision and the gains made in your first term, Ghanaians may consider giving you another four years,” he stated.

Torgbui Nyagasi, who made the call at a durbar of chiefs and people of Nyagbo to welcome the President, as part of his three-day tour of the Volta and Oti regions, also implored the President to ensure that the forthcoming elections on December 7, 2020, were peaceful.

The newspaper continued that Torgbui Nyagasi courted the President on the tourism potential of the area which he said, were embedded in several natural wonders.

He said the district had waterfalls, ancestral caves, monkey sanctuary, among other sites that could be developed to generate more revenue for the country.

He stated that the government’s blueprint for the ‘Year of Return’ which greatly enhanced tourism, economic gains among others, could be used to develop tourism in the district.

Many social media commentators, could not come to terms with Torgbui Nyagasi’s comments in favour of the President and they took to Facebook to express their views.

Prof Ben. Q. Honyenuga was appointed by the governing board of the University, despite concerns and protests from some lecturers of the school which led to investigations by Economic and Organised Crime Office (EOCO) and other bodies in charge of tertiary education in Ghana.

Meanwhile, there are reports that he and other Judges, Justice Tanko and Private Legal Practitioner, Yoni Kulendi, are being considered for Supreme Court appointment by the government.

Those who know him well, reveal he is a known friend of Justice Jones Dotse, one of the Supreme Court judges, recently considered the vacant Chief Justice position until Justice Anim Yeboah was preferred by President Akufo-Addo over him.

Responding to Torgbui Nyagasi’s comments at the durbar, President Akufo-Addo, gave an assurance that the government would ensure that the 2020 general election, would be conducted in a free and fair environment.

“I want to assure you that the circumstances that made previous elections peaceful, free and fair are going to be present in this year’s election,” he assured the people.

He noted that Ghana had a good reputation for holding free and fair elections which had seen the successful change in governments for the past 27 years.

Touching on the request for the tourist sites to be developed in the area, President Akufo-Addo acknowledged that, the Afadjato South District, was one of the most endowed tourist sites in the country.

He said the government would pay attention to develop the tourism sites, as well as the roads as outlined by the Minister of Roads and Highways.

The Deputy Minister of Education, Dr Yaw Osei Adutwum, said the Free SHS policy, was going to put the country on the right path to development such as South Korea.

Cement prices in Ghana increased due to Cedi depreciation