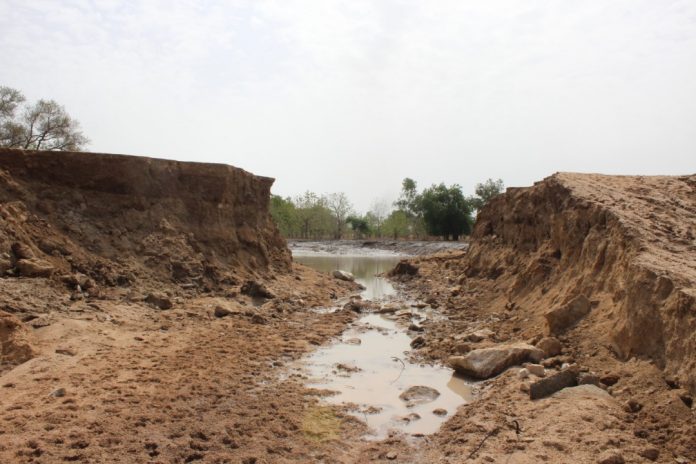 One of government’s projects under its flagship One Village, One Dam (1V1D) policy constructed in Kajelo, a community in the Kasena-Nankana West District of the Upper East Region, has been washed away by Tuesday’s heavy downpour.

Our Reporter, Senyalah Castro, who has been to the site reports that, the high water levels from Tuesday’s downpour has knocked down and washed away the central portion of the dam wall creating a split and leaving behind a fragile structure.

He adds that the misfortune has also left behind huge dunes of sand at places that had previously been excavated, resulting in the silting of a larger portion of the dam and watercourse.

Our Reporter continues that community members, who were present at the time of visit to the site, have expressed displeasure at the development, blaming the construction company for doing a poor job.

According to a few who spoke on grounds of anonymity, concerns were raised by the community asking for proper reinforcement of the bank, but the contractor, they said, did not heed their concerns.

“Now that everything has been destroyed by the rainwater, it is a call on us to tell the constructor to take his time and do the work well and proper. We will resist any shoddy work,” They vented.

The Kajelo community project is one of the first batch of six dams approved and being constructed in the Kasena-Nankana West area. The district has been allocated a total of 10 dams with the rest going to communities including Sakaa, Kazugu, kuliyaa, Katiu-Saa and Kayoro.

The District Chief Executive, Gerard Ataogye cut the sod in December and handed over the Kajelo site to Time Line Constructions Company Limited for the commencement of work.

Until the misfortune, major work on the project had been completed. It is gathered that planting of trees and river grasses along the bank of the dam to protect it was the constructor’s next plan of action.

Meanwhlie, Assemblyman for the Kajelo Electoral Area, Hilary Aniakwo, has said he is not happy with the turn of events and wants the contractor to return to site as soon as possible.

According to Mr. Aniakwo the collapse of the bank of the dam is clear indication that the contractor did not do a proper job. He said the constructor’s failure to listen to suggestions from “we those who live in the community and know it well, is what has caused this problem”.

He appealed to community members to stop faulting government in this and remain calm as the assembly woks to bring the construction company back on site.