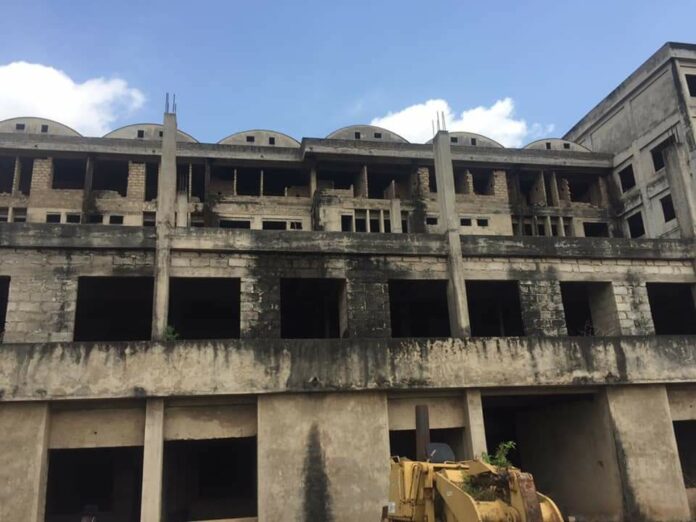 The state is to pull down the four-decade-old uncompleted maternity and children’s block of the Komfo Anokye Teaching Hospital (KATH) officials have announced.

This, according to government officials is to allow for the reconstruction of an entirely new ultramodern edifice, at the nation’s second referral center.

Authorities say the facility which is located in the Ashanti Regional capital has failed to meet its structural integrity test after an assessment by the construction firm tasked to ensure its completion.

President Akufo-Addo in May 2020 cut the sod for the construction of the project and gave a completion deadline of 36-months.

The construction and completion of the project will be funded by the Deutsche Bank in Germany at a cost of €155 million.

Ashanti Regional Minister, Simon Osei Mensah who spoke on Kumasi-based Abusua FM confirmed that the decision to pull down the facility is based on the final report by the construction firm, Contracta, after its assessment of the whole structure.

“The construction firm proposed that the building should be demolished and re-constructed entirely after it conducted a structural integrity test on the facility. The proposal was tabled before authorities and a decision to pull down the building was arrived at. This is necessary because it is good to do the right thing since one does not know what could happen in the future should the contractor go-ahead to continue with the project. So it is true that the facility will be pulled down and reconstructed with new designs altogether,” he explained

The Minister said a stakeholder consultation has begun to sensitize the public especially people who live close to the facility to get them to cooperate with authorities when the demolishing of the project starts.

He indicated that patients on are currently on admission at the hospital will also be notified about the demolishing exercise.

Mr. Osei Mensah added that the facility will be pulled down after the public sensitization is over.

A report by Accra-based Citi FM indicate that bulldozers are stationed at the project site with a portion of the facility already pulled down.

The area has also been barricaded with warning signs erected to notify the public of the dangers associated with getting close.

Some residents in the Ashanti Regional capital have been sharing their thoughts on the development.

For 50-year-old Pastor Jones Ofori: “Human life is very precious. So if it will be maintained and then in future it will cause trouble and collapse and kill people it is better it is demolished to save future human lives. What we are doing now is that we are comparing human life with the cost of the building but with this decision I think it is a step in the right direction”.

“We don’t have a choice”, Abigail Asiedu, a nursing mother said. Pulling it down is not easy… But my concern is what has past and present government done to continue working on the project? Someone should be made to face the law. They have failed us.

The project began in 1976, as part of the Komfo Anokye Teaching Hospital (KATH) Expansion Project, but came to a standstill in 1979.

Once completed, the Maternity and Children’s Block will be a state-of-the-art, modern health edifice, with paediatrics, gynaecology, and obstetrics units.

It will serve as a referral centre for 12 of the 16 regions of Ghana.

It will be a 750-bed building, with outpatient areas for adults and children, and it will have 10 operating theatres and diagnostic rooms, fully equipped with X-Ray, ultrasound, and mammography facilities.

The facility will also house an intensive care unit, a high dependency unit, isolation rooms, and student lecture halls, with the capacity to provide catering services for staff, patients, and students.