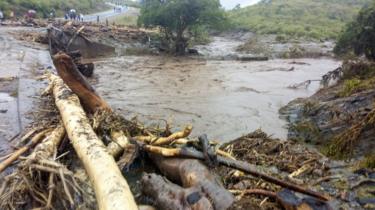 At least 29 people have died in landslides caused by severe weather in West Pokot county, Kenya.

The landslides, affecting the villages of Nyarkulian and Parua, were reportedly caused by heavy rains.

Officials say the villages have been cut off by flooded roads and at least one bridge was reportedly swept away.

President Uhuru Kenyatta said in a statement that his “heartfelt condolences” were with the relatives and friends of the victims.

Mr Kenyatta said there had been “massive destruction” of property and infrastructure, and that he has ordered armed forces and rescue services to the area to help.

Seven children were among the dead recovered so far, officials said.

Interior Minister Fred Matiang’i confirmed that rescue operations were “ongoing”, adding that “harsh weather conditions” were hampering a full assessment of the damage.

Images on social media showed trees, mud and other debris scattered across roads.

The Red Cross has confirmed it is responding to reports of the “massive” landslides.

Kenya’s meteorological department issued a warning of heavy rains on 18 November, telling people in “landslide-prone” areas to be on “high alert”.

Countries throughout east Africa have been affected by the downpours in recent weeks.

Landslides and flash floods have killed people in Ethiopia and Tanzania while hundreds of thousands have been displaced in Somalia by heavy rains.

Scientists warn that a weather system called the Indian Ocean Dipole is making flooding worse in the area.

Minority demands audit into payment for customers of collapsed Banks