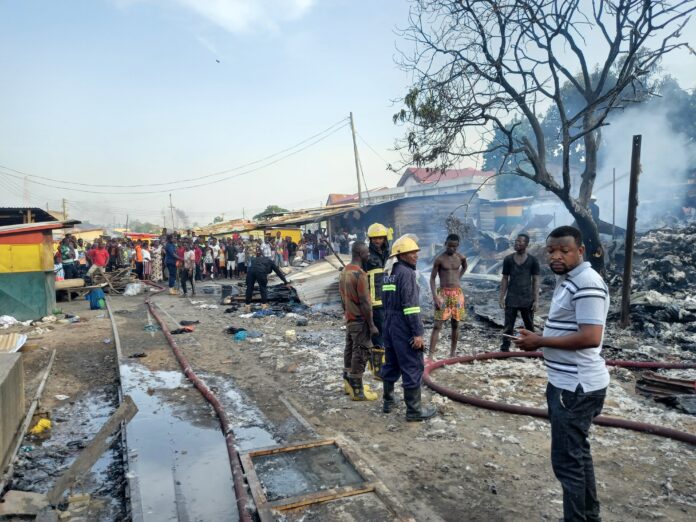 An 18-year-old boy has died after a violent fire raced through portions of makeshift structures close to the Cocoa Clinic, at Adum in Kumasi, according to fire officials in the Ashanti Regional capital.

The devastating blaze, which broke out around 14:00 GMT on Sunday at the slum, was brought under control by firefighters almost an hour later.

Firefighters told reporters that at least 35 structures have been razed down by the inferno, with several properties running into hundreds of cedis being destroyed.

The deceased named as Nana Yaw, 18, was sleeping in one of the wooden structures when he got trapped in the raging fire. He was burnt beyond recognition, according to a police report sighted by dailymailgh.com.

Correspondent Arafat Musa said from Adum there “are fears there could be more casualties. The fire officials and the police have been here doing an assessment”.

The incident occurred when a lot of occupants of the slum, mainly occupied by head potters were not available. Other affected victims gave information to the police at the scene.

Nyamekye Ayine, whose home was destroyed in the fire, said she only survived the blaze as she was asleep while working on her corn dough.

“I was asleep when I was alerted of the fire. When I came one of the rooms was under fire and I had to run. Just as we begun calling the fire service, a loud noise was heard and that was it…” she told dailymailgh.com.

“For now I don’t have anywhere to lay my head”, she said.

DO I Rashid Nissawu, the Metropolitan Fire Officer told dailymailgh.com that the cause of the fire is yet to be ascertained adding that a huge cotton deposits at the affected area contributed to the rapid spread of the inferno.

“So far we managed to marshall three fire pumps and and now the fire is under control and has finally been extinguished. One person has been burnt in the fire and we have reported to the police”, he said.

“We are going to do salvaging because there are fears the death toll could rise… We have to finish fighting the fire before we commence investigations”, he added.

Meanwhile, the remains of Nana Yaw have since been deposited at the Komfo Anokye Teaching Hospital morgue for preservation, a police incident report said.

I’ve not changed, others have – Rawlings