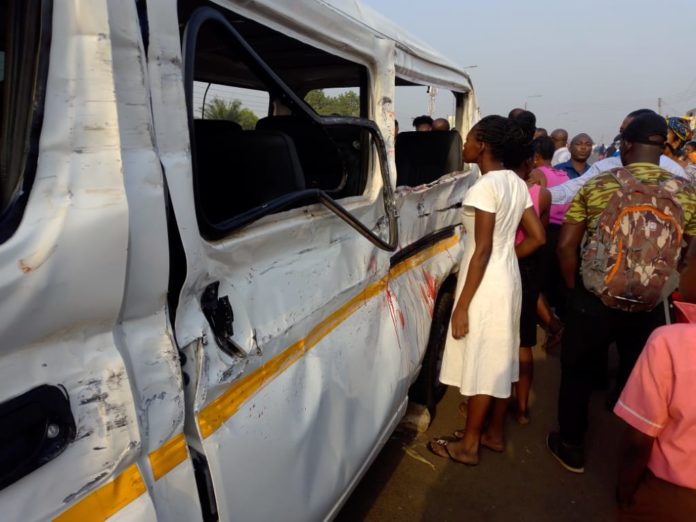 A 50-year-old woman, Adwoa Korama, has been confirmed dead after two vehicles were involved in an accident on the Abrepo highway in Kumasi, Wednesday morning.

Six others who sustained various degrees of injury are receiving treatment at the Komfo Anokye Teaching Hospital and the County Hospital, police say.

The incident occurred at about 4:00am — nearly 24 hours after a similar accident left 34 persons dead on the Komenda-Capecoast Highway in the Central Region of Ghana.

Emergency services were called to the scene as the accident which occurred closed to a bridge undergoing construction caused a heavy traffic.

The Ashanti Regional Police Command, which is investigating the matter says two persons have been arrested following the incident.

“The information we gathered is that the driver of the minibus is a spare driver. So he has been arrested and is being interrogated. The main driver who allegedly gave the vehicle out has also been arrested”, said the Ashanti Regional Commander at the Motor Traffic and Transport Department, Supt Emmanuel Adu Boahen.

He further clarified that no police officer was involved in the accident as being widely reported.

That stretch has recorded three road accidents, according to the police.

He wants such drivers punished.