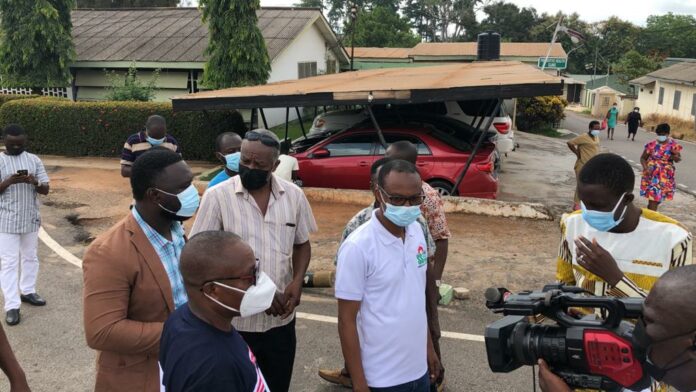 Striking Senior Staff of Universities of Ghana have been asked to immediately resume work following an order by the National Labour Commission (NLC).

The NLC has also asked its leadership to appear before it on Wednesday, June 9, 2021, to discuss their concerns.

This order comes after it received a letter from the Ministry of Health that in furtherance of the strike action embarked upon by the Senior Staff Association of Universities of Ghana, its members providing essential services in hospitals, clinics, fire service, anatomy departments and basic schools in public universities have been asked to also lay down their tools.

In a letter to the association on Tuesday, June 8, 2021, NLC said the order is in exercise of its powers, to remind the association that its action goes against section 127(3) of Act 651.

“The National Labour Commission in the exercise of its powers under Section 139(d) of the Labour Act, 2003 (Act 651) wishes to draw the Association’s attention to a contravention of Section 127(3) of Act 651 and hereby directs the SSA-UoG to not only withdraw the said directive to the essential service providers but to also call off the ongoing strike immediately pursuant to Section 161 of Act 651 and appear before the Commission tomorrow, Wednesday 9th June 2021 at 3 pm.”

The NLC said it will be forced to “enforce compliance” if the association fails to appear before it on the said day.

The association declared an indefinite strike three weeks ago over the failure of the government to pay the Tier 2 pension of its members.

Among other things, members of the association are asking for the award of market premium and non-basic allowance as well as the finalization of negotiations of their conditions of service.

The association already has a scheduled meeting with the Fair Wages and Salaries Commission (FWSC) to address issues concerning their ongoing strike.