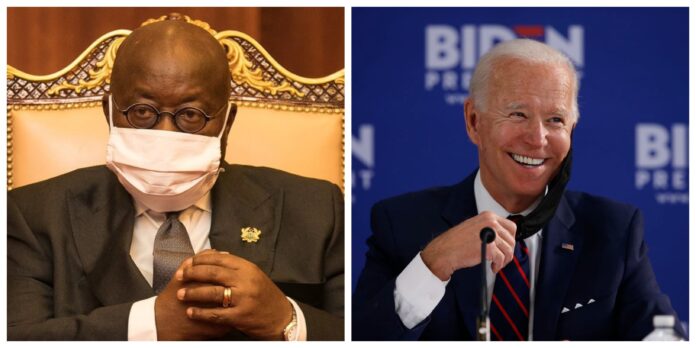 Ghanaian leader, Nana Akufo-Addo, has called on US President-elect, Joe Biden, to unite America after trumping incumbent Donald Trump in the elections.

In a congratulatory message to the 46th president of the US, Akufo-Addo said Biden’s tenure of office should be “marked by the delivery of unity”.

Also, he hopes to have a cordial working relations with the new president when he is inaugurated in January 2021 if he also wins the Ghana general elections on 7 December.

“I am hopeful that, over the course of his presidency, relations between Ghana and the United States of America will continue to grow from strength to strength, relations which have, over the years, been based on a shared agenda of freedom, development, progress and prosperity,” the Ghanaian leader said.

He added: “It is my sincere hope that President-Elect Biden’s tenure of office will be marked by the delivery of unity, security, progress and prosperity to all Americans.

“Warm congratulations, once again, to President-Elect Joe Biden, Vice President-Elect Kamala Harris, and the people of the United States of America. God bless the American people, and best wishes for their country’s continued success.”

Dawn of a new era

He is also calling on Biden to make unity a priority.