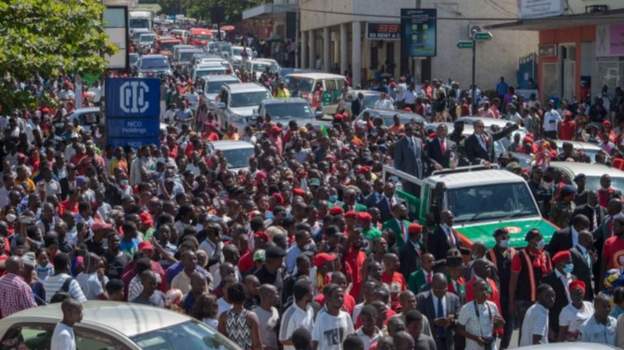 Huge political rallies were held over the weekend that completely defied social distancing and mask-wearing measures, hours after the country reported its highest single-day spike in confirmed coronavirus cases.

Malawi will hold a fresh presidential vote after last May’s re-election of President Peter Mutharika was nullified by the country’s Constitutional Court.

Opposition candidate Lazarus Chakwera, who has formed an alliance of nine parties, held a huge campaign rally in the northern city of Mzuzu on Sunday.

President Mutharika’s running mate, Atupele Muluzi, also addressed a huge gathering of his own on the same day in the capital, Lilongwe.

The rallies were held a day after Health Minister Jappie Mhango confirmed 13 more coronavirus cases, with five of the cases detected among health workers. The country has to date reported 57 cases and three deaths.

The Malawi Electoral Commission (MEC) has adviced political parties to seek new ways of campaigning in the wake of the pandemic, but neither of the two sides has heeded the call.

A ministry of health official described the campaigns as regrettable, but said their role is limited to just prescribing measures and it is up to other arms of government, such as the police, to enforce them.