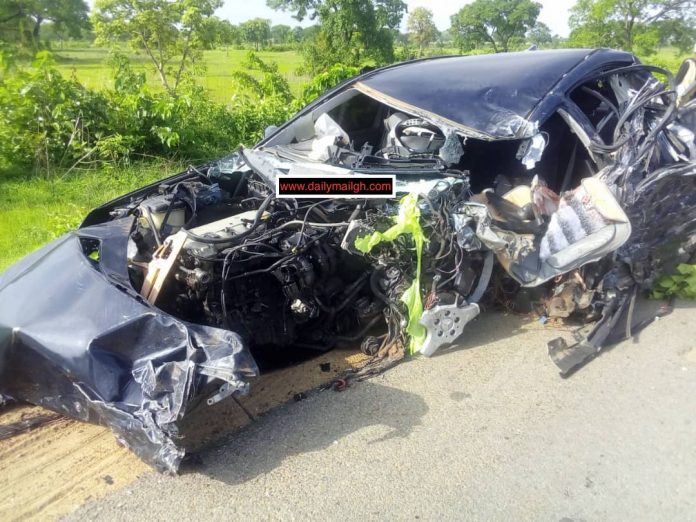 The driver of the Mercedes Benz saloon car which ploughed into a convoy involving four Municipal and District Chief Executives in the Northern region on Monday, 24 June 2019, has died.

Authorities at the Tamale Teaching Hospital also confirmed the incident to Newsmen on Tuesday.

Karim’s car had a head-on collision with the 4 x 4 carrying the MCEs and DCEs for Nanumba North (Bimbila), Gushegu, Zabzugu and Mion, respectively.

He had multiple injuries on both legs and head.

Meanwhile, two government appointees are still on admission at the hospital, authorities have said.

They are Mion DCE, Abdallah Hashim, who complained on Tuesday about some chest pains and, has, therefore, been detained for further medical examination.

The Zabzugu DCE, however, is still on admission at the intensive care unit.

The hospital declared the two as stable.

Dr Takye said though his condition has also been stabilised, he is under further observation because of the severity of his injuries.

Meanwhile, the President of the National Association of Local Authorities, NALAG, Bismark Nkum together with the Women Caucus representative, Mariam Iddrisu and other executives visited the victims on Tuesday morning to commiserate with them.

He said this incident would now get people to appreciate what they do as government officials, adding that: “This is not necessarily to our benefit but then in the course of duty for the society.”

“So, these are the things that the society must begin to think through, not just to perceive that so far as they see a long convoy, then people are necessarily enjoying themselves”, Mr Nkum said.