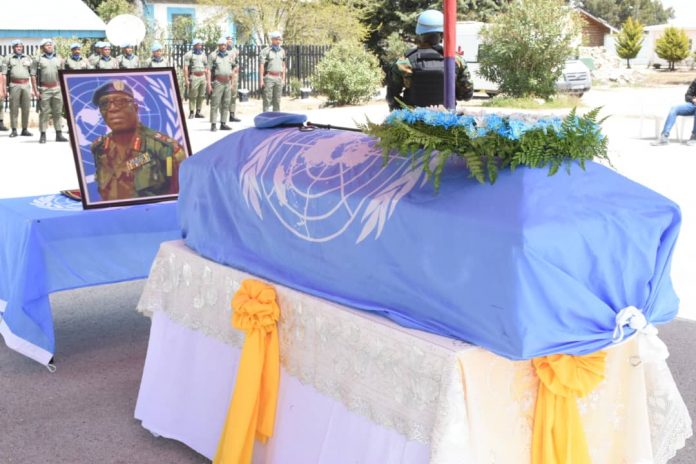 A memorial service has been held in Israel for the late Major General Francis Vib-Sanziri, the Head of Mission and Force Commander of the United Nations Disengagement Observer Force (UNDOF) on Wednesday 24 April 2019.

Maj Gen Vib-Sanziri was appointed by the United Nations Secretary General, Antonio Guterres in October 2017 to head the Multi-National Force. He was the former Director-General of the National Disaster Management Organization from 2015 to 2017. Maj Gen Vib-Sanziri, aged 62 passed away suddenly on Friday,19 April 2019 at Eilat, Israel.

The solemn ceremony which was held at Camp Ziouani was graced by Ghana’s Ambassador to Israel, Mrs Hannah Ama Nyarko and other Ambassadors from Nigeria, Zambia, Rwanda, Nepal, among other diplomats.

In her remarks, Ghana’s Ambassador to Israel who was representing the President of Ghana Nana Addo Dankwa Akufo-Addo, extolled the virtues of the late General who was very professional and dedicated to duty. Akufo-Addo in a condolence message on his passing, noted that, Ghana had lost “a fine, dedicated, professional military Officer, who served his country and the global community with distinction.

A 25-member delegation from Ghana Battalion 85 under the leadership of the Contingent Commander, Colonel John Lawluvi and the Commanding Officer, Lt Col Fiifi Deegbe serving in the United Nations Interim Force in Lebanon (UNIFIL) took key part in the ceremony held in Israel. The body of the late Maj Gen Francis Vib-Sanziri draped in the UN flag was given the final honors of the last post, followed by 2 minutes silence and the reveille.

There was also a wreath laying ceremony where Ghana’s Ambassador to Israel, her Excellency Mrs Hannah Ama Nyarko laid a wreath on behalf of the Government and people of Ghana. Other key personalities at the ceremony also laid wreaths for the departed Force Commander.

Other dignitaries at the memorial service included, Major General Cheryl Pearce, the Force Commander of the United Nations Peacekeeping Force in Cyprus (UNFICYP), a delegation from the United Nations Interim Force in Lebanon (UNIFIL) , Senior UN military and civilian staff, representatives from the Israeli Defence Force and other mourners from Israel and Syria.

A similar memorial service will be held on Friday, 25 April 2019 at Camp Faouar in Syria Arab Republic. The body of the late General is due to arrive in Ghana on Saturday, 27 April 2019 for further funeral rites.

Gattuso was the toughest player I faced – Appiah