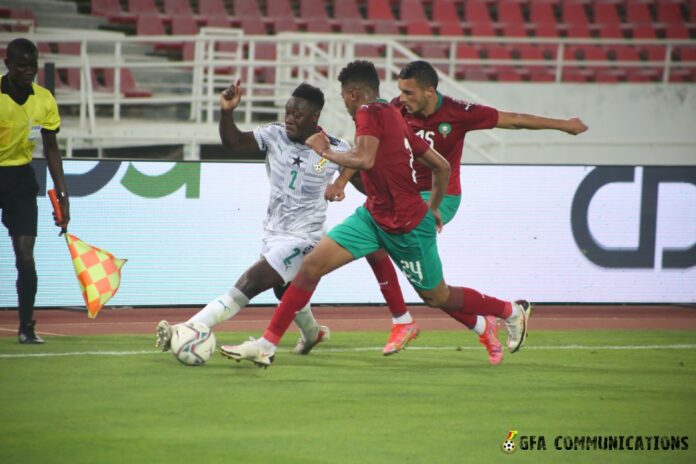 Atlas Lions of Morocco I inflicted a painful defeat on Ghana’s Black Stars in an international friendly in Rabat on Tuesday evening with a 1-0 score line.

The home team took the lead in the second half after a goalless first 45 through a goalkeeping error by Asante Kotoko goalie Razak Abalora who missed the ball completely as he tried to punch a crossing following a cross from Hakim Zeyich as the hosts pounced on his error to punish Ghana.

Morocco dominated the opening exchanges of the match but it was Ghana who had the first shot at goal when debutant, Joel Fameyeh connected with Andy Yiadom’s cross but his effort was over the crossbar.

Ghana grew in confidence and found their way into the game with a well composed football on display to match their opponents early dominance.

The first half of the match ended goalless.

Ghana came in strongly after the break and started asking questions and captured the middle of the field but could not convert their possession into creating good goal scoring chances.

Baba Iddrisu, Joel Fameyeh and midfield-gem, Kudus Mohammed of AFC Ajax Amsterdam in the Dutch Eredivisie were the brightest spots for Ghana and played very well for the most part of the match.

Twenty minutes to full time, Razak Abalora’s error in the box allowed defender Jawal El Yamiq to head home the only goal of the match to give the Atlas Lions a famous win over the Black Stars.

Kudus came closer to restoring parity but his effort was saved by Bonou in posts resulting into corner but the Moroccans cleared their lines.

Andre Ayew was subbed on late in the game but could not change the fortunes of the game as Ghana suffered a narrow defeat in Rabat.

Ghana will play Ivory Coast on Saturday evening at the Cape Coast stadium in their last friendly match of the international break.