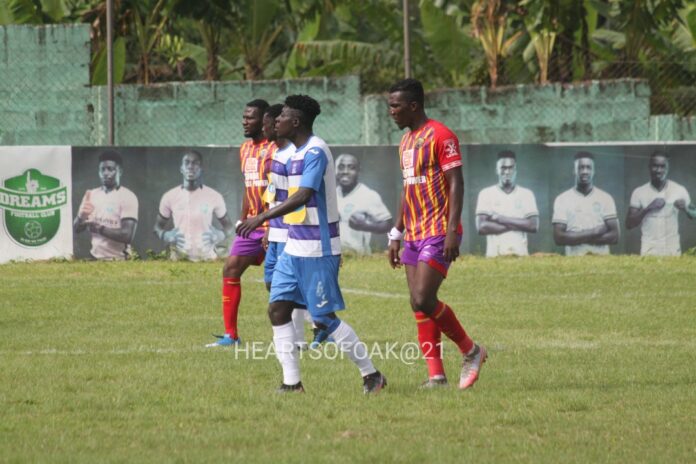 Daniel Afriyie Barnieh’s second half penalty sent Accra Hearts of Oak SC into the quarter-final of the 2020-21 Ghana FA competition.

Hearts defeated Division One League Zone Three side Accra Young Wise FC by a lone goal in the FA Cup round 16 clash in Dawu on Wednesday afternoon.

The Premier League leaders took the game to the second tier side and stamped their authority on the game with early incursions from both their fullbacks, Fatawu Mohammed and Raddy Ovouka.

The Phobians showed why their on top of the league table after 32 matches with 60 ponts and a game away from lifting the covetous league trophy for the first time since 2009 with a masterclass performances in the early exchanges of the match.

Though the Phobians could not found the back of the net despite their pressure on the home team, they didn’t take their foot off the paddle and made things difficult for the youngsters.

Hearts continued to dominate the game and controlled the pace of the match by keeping the ball well to themselves and leaving Young Wise players chasing shadows.

Benjamin Afutu headed Ibrahim Salifu’s corner way over the cross bar and Afriyie Barnieh’s shot after Afutu’s effort minutes later was well dealt with by the defenders of the home team.

Striker, Abednego Tetteh thought he had opened his goal account for the season when he headed home from the goal area into the net but only for the assistant referee to raise his flag for an offside.

Though the striker disagreed with the call by the officials but he seemed a fraction offside before the ball was sent into the box.

Captain, Fatawu Mohammed came close to breaking the deadlock of the match in the dying embers of the game but he could not connect to the corner kick swang in by Salifu as the first half ended goalless.

Hearts came from the break with more purpose in attack and pilled pressure on the home team to force them into playing most of the game in their half allowing goalie Ben Mensah to a free day in posts.

Nonetheless, the few times Young Wise came into the goal area of Hearts of Oak, Mensah was up to the task to repel any danger by the second tier team.

After a beautiful build up play by the Phobians, Barnieh was adjudged to have been brought down inside the box by Young Wise goalie and the Ghana U20 captain slotted home the only goal of the match to seal qualification for the Rainbow Boys.

Hearts of Oak’s ambition of winning the double this season is on course as they are one win away from clinching the 2020-21 Ghana Premier League title and are through to the quarter finals of the FA Cup.

The game finished 1-0 to the Ghana Premier League giant at the end of the entertaining encounter in Dawu on Wednesday afternoon.

NPP’s disgraceful men governing by ‘spur of the moment’ – Asibit...