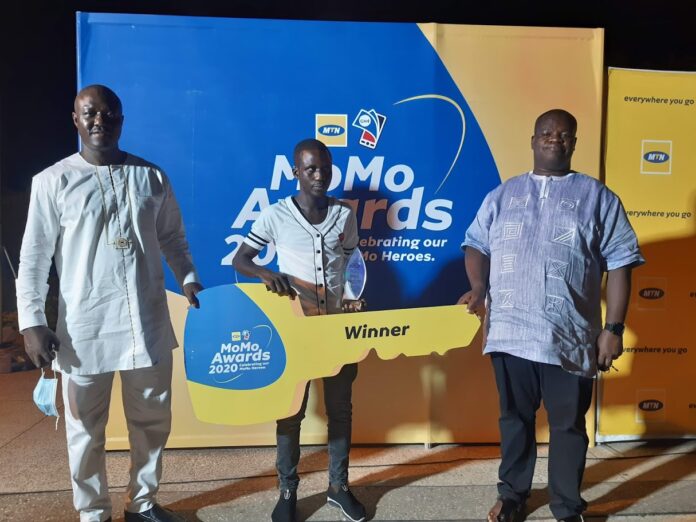 Ghana’s telecommunication leader, MTN, on Saturday, crowned Quicktel Ventures based in Buipe in the Savannah region, as the overall winner at its 2020 Mobile Money Awards for Northern Ghana.

The company was awarded a brand-new Toyota 4×4 Rush SUV, 2020 edition, at the colorful event held at the Golden Tulip Kumasi City in the Ashanti region.

Speaking to Fox FM Online after the presentation, the General Manager for Mobile Money Limited at MTN Ghana, Eli Hini, mentioned that the awards ceremony is targeted at celebrating the hard work and efforts of their agents and merchants, promoting the mobile money agenda and a cash-lite financial system, nationwide.

“This exercise is extremely important and that’s why you see that we’ve attached a lot of importance to the event. We’re here to show appreciation to our agents who have been with us throughout the beginning of the business.”

“MTN MoMo is ten years and still counting and so we believe that these are ways, by which we can show appreciation to our agents who have worked so hard. During Covid-19, it was tough; some places were on lockdown and we all know what happened, it was difficult to move around but these agents were very resilient, they showed a lot of commitment and continued to serve customers. They were the ones actually driving the financial service industry within the country and so we applaud them and we need to continue to show and demonstrate to them, how much their business and efforts mean to us”, he added.

Quicktel, represented by Haruna Mohammed, expressed gratitude to MTN Ghana for the recognition and to their customers for patronizing their service.

Meanwhile touching on mobile money fraud, Mr. Hini underscored that MTN will not renege on its commitment of enhancing its systems and collaborating with relevant authorities to reduce the occurrence of fraud. He also urged customers to be vigilant and report any fictitious transactions.

“We’re working continuously to sanitize the system and so if you’re suspicious about some activities, kindly report to 1515 or 419. Every good system is as good as the weakest link in the chain; therefore, our customers have to step up their role. We’ve said that keep your PIN a secret; it means that nobody should call you under any circumstance and you give your PIN away.”

He continued that: “Nobody should allow another person to perform a transaction on their behalf because by the time you do that, you would have exposed your PIN and then MTN will not call you to discuss mobile money issues with you, even if we will call for any important thing, it’ll be 0244300000.”

The MTN MoMo Awards under the theme “Celebrating Our Heroes” has already been held in the national capital, Accra, and will hit the Western regional capital, Takoradi early next year.

Launched in 2009, with less than 100,000 subscribers, MTN started its mobile money operations with two major products, being the money and airtime transfers.

A decade down the line, the network now boasts of over 14 million active MoMo users and a myriad of services including pensions, insurance, investments, loans, bills payment among others.

Fuel prices in Ghana to remain stable in April – IES