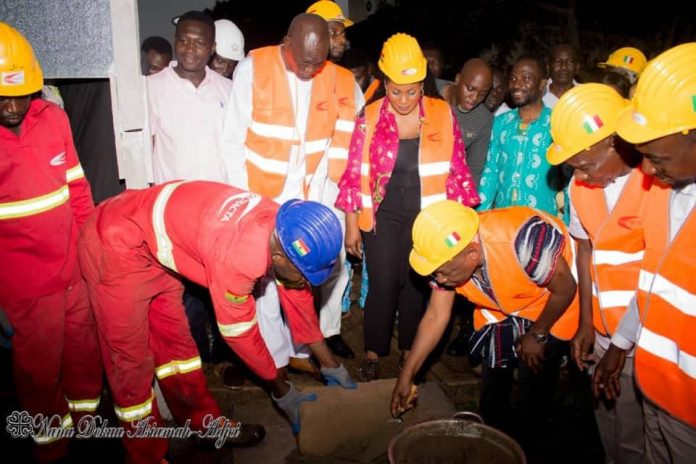 The MP for Akuapem North Constituency and Deputy Minister for Information Nana Ama Dokua Asiamah Adjei has vowed to ensure an improved health care needs while promoting a comprehensive development of the wellbeing of his constituents.

On Friday, the Health Minister Kwaku Agyeman-Manu and the Eastern Regional Minister Kwakye Darffour joined the deputy Information Minister for a sod cutting exercise which signifies an official commencement of the refurbishment and expansion of the Tetteh Quarshie Memorial Hospital in Mampong which hasn’t seen any upgrade and maintenance for many years.

The ceremony was also attended by the Mamponghene Osabarima Otu Darteh, Evangelist Dr Abboah Offei, Opinion leaders the youth among others.

Addressing the gathering ,the deputy minister described the move as a giant step in fulfilling a significant portion of her pledge to improve health care after assuming office as MP.

“When I took over as the Member of Parliament for Akuapem North Constituency, I made a solemn commitment of ensuring an improvement in the health needs and to promote a comprehensive development of the wellbeing of my people. As part of this commitment, I am happy to announce that, a giant step in fulfilling a significant portion of the pledge I made to my people has manifested,” she said.

Meanwhile, work has already started on the rehabilitation of the inner link road to the doctors’ bungalows which was in poor and deplorable state.

Nana Ama Dokua Asiamah Adjei later told reporters the hospital, after this refurbishment and expansion, will effectively and efficiently deliver on its mandate by providing first-class health delivery services to the good people of Akuapem North and Ghana as a whole.

“Let us remain positive in the Hope we believed in and the Change we voted for under President Nana Akufo-Addo,” she added.

Ghana’s Abubakar-Ankra on target for Kriens

Not even family property is shared with such impunity – Nana...