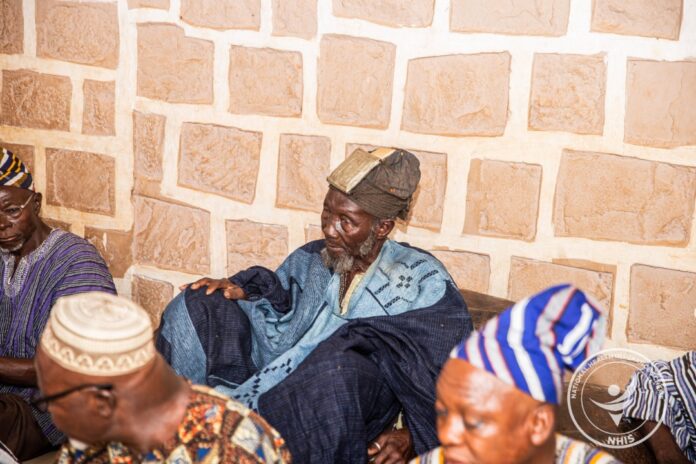 Overlord of the Mamprugu Traditional Area, Nayiri Mahami Abdulai Sheriga has implored all residents in Ghana to sign up to the National Health Insurance Scheme (NHIS).

According to him, the NHIS is the surest way of accessing quality and affordable healthcare services.

The Nayiri was addressing a delegation from the NHIA in his palace at Nalerigu when the Chief Executive, Hon. Dr. Bernard Okoe-Boye paid a courtesy call on him.

He commended the NHIA Board and management for given the region two new operationl vehicles to increase their coverage.

The Nayiri made a case for a rapid completion of the ongoing regional office complex which is 70 percent complete.

He further asked for more staff to be deployed to the region to augment the NHIS district operations.

For his part, the NHIA Chief Executive, Dr. Okoe-Boye renewed his administration’s commitment to support the district and regional offices to deliver their mandate.

He appealed to the nation’s traditional leaders to incorporate the NHIS advocacy into their development strategies.

He advised the NHIA management to weed out such service providers as means of sustaining the Scheme.

“Illegal charges at the facilities are affecting quality hethcare delivery in the region. Weed out those sabbotteurs in the system.”

The Regional Minister added, “NHIS coverage in North East is very impressive. The staff move to the hinterlands to register people.”

“I thank executive management and the Board for given the region two new operational vehicles. Mobility is no longer a problem.”

Dr. Okoe admitted that the issue of illegal payments was a major challenge but referenced the setting up of a Copayments Committee to find a permanent solution to the problem.

According to him, the nation’s major health facilities financial stability largely depended on Claims paid by the NHIA.

He accordingly served notice that any credentialed facilities caught charging illegal fees would have their licenses revoked.

As usual, Dr. Bernard Okoe-Boye interacted with staff and promised to address their welfare challenges.

The NHIA Chief Executive is on a working visit to the northenr belt comprising the Northern, North East, Savannah and Upper East regions, except the Upper West region.

He is being accompanied by some NHIA Board members and some members of executive management among others.

Ghana plans to buy oil with gold instead of U.S. dollars