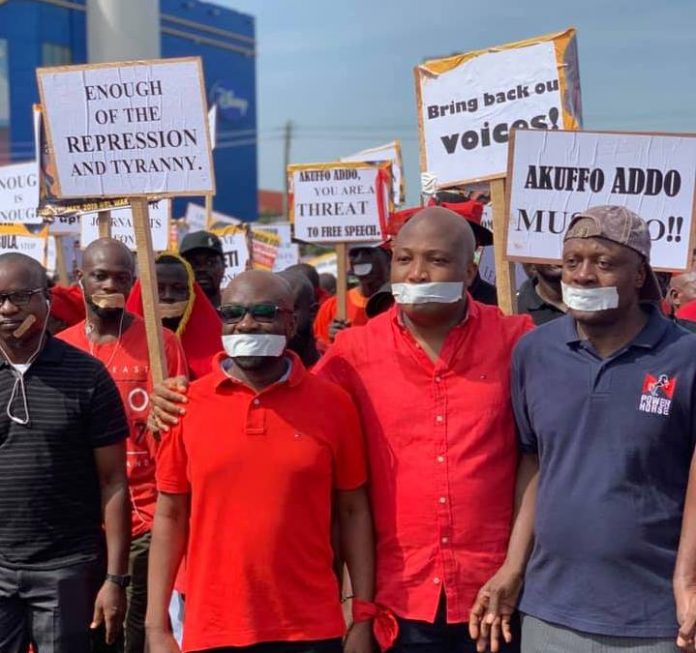 Hundreds of people from all walks of life including National Democratic Congress (NDC) members of parliament Tuesday hit the streets to protest the closure of two pro-opposition radio stations – Radio Gold and XYZ.

They said the government through the National Communications Authority (NCA) is suppressing free speech and press freedom.

They wielded placards with inscriptions such as: “Enough is enough”, “Akufo-Addo, you are a threat to free speech”, “stop adding tyranny to hardship”, “Leave Adeti alone” among others.

Organized by pressure group, Free Media Vanguards, they have given the NCA a week’s ultimatum to reopen the radio stations.

The group described the NCA’s action as an abuse of its powers and suppression of press freedom.

The NCA has explained the two stations in some 30 others breached Electronic Communications Regulations.

The Minority also believes that the state action “has created a climate of fear, impunity and arbitrariness” hence the need for “an unwavering and formidable resistance from all those who believe in true democracy and constitutionalism.”

It also condemned the closure of the stations and described it as crude, selective and “reminiscent of how brutal dictators operate.”

Medeama Believe Their Time Is Now — And Why Not?