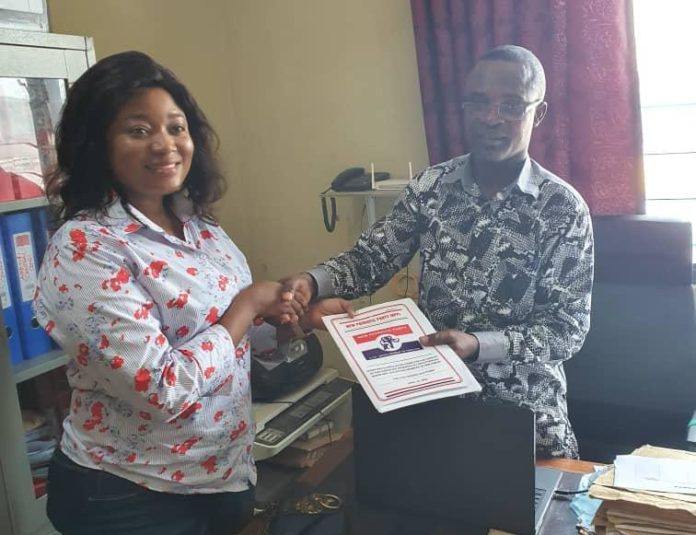 The CEO of Joy Foundation, Joy Joycelyn Andoh, has filed her nomination papers to contest the incumbent Member of Parliament for Tarkwa-Nsuaem, George Mireku Duker.

At a heavily attended short ceremony to file her nomination papers, Andoh told supporters that her decision to join the race was an honour to calls from the people on her to represent them in Parliament.

According to her, may people believe Duker had lost his relevance in the community, hence the need for Joy to come in and change the direction of the development of the constituency.

Andoh, who is seen as a possible contender to Duker over the NPP seat in the Tarkwa-Nsuaem, hopes to win the primaries and win the elections as well.

Andoh’s work as a leader of the NPP Loyal Ladies, has won the hearts of majority of party supporters and delegates who have declared their support of voting for her to become the MP aspirant of the party.

Although Duker has been holding the seat for some number of years, many people said the coming of Jocelyn will change things a lot. According to them, they have clamoured for such a vibrant personality to lead the party in the constituency for too long and that since Andoh is contesting the primaries, they will offer themselves for her to succeed.

NPP supporters in the constituency are willing to campaign massively for Andoh to win the primaries and win the elections as well.

Joy said her work as a Philanthropist working with an NGO affords her the opportunity to relate with the people, know their problems hence will be better placed to address those problems when she becomes the MP for the area.