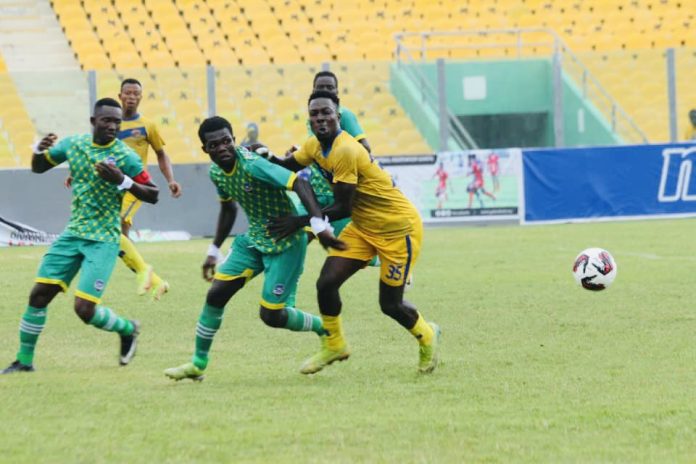 Division One League Zone One candidate for the 2022-23 Ghana Premier League season was decided on Tuesday afternoon in Accra at the national sports stadium.

Nsoatreman pipped Tamale City in a 2-1 in the Playoff of Zone 1 at the Accra Sports Stadium on Tuesday afternoon as they booked their place in the Ghana top-flight for the first time in the club’s history.

Both teams had same points in the just ended season in the Division One League Zone One and had the was level on head to head bases.

Due to this, the teams needed to be separated through the playoffs system which was played today, Tuesday , June 21, 2022 to determine who joins the Ghana top-flight league.

Samuel Ofori and Charles Asante scored the goals for the Greens who won 2-1 on the day to secure their passage into the top-flight for the first time.

Godknows Dzakpasu scored from the spot for the Yellow and Blues but his goal was not enough to secure promotion for the Tamale based club.

City threw everything they had at Nsoatreman but failed to get the needed goal to take the game into penalty shoot-outs and missed out on promotion.

Tamale already have Real Tamale United FC in the top-flight and were keen to to have another Premier League team but the Brong Ahafo side had a different idea as they beat the Yellow and Blues to emerge winners of Zone One and secures top-flight football for at least one season.

The Ghana Premier League will have two debutants in the league as three teams that has never played in the top-flight in the past namely Samartex FC, Oda Kotoku Royals and Nsoatreman gained promotion.