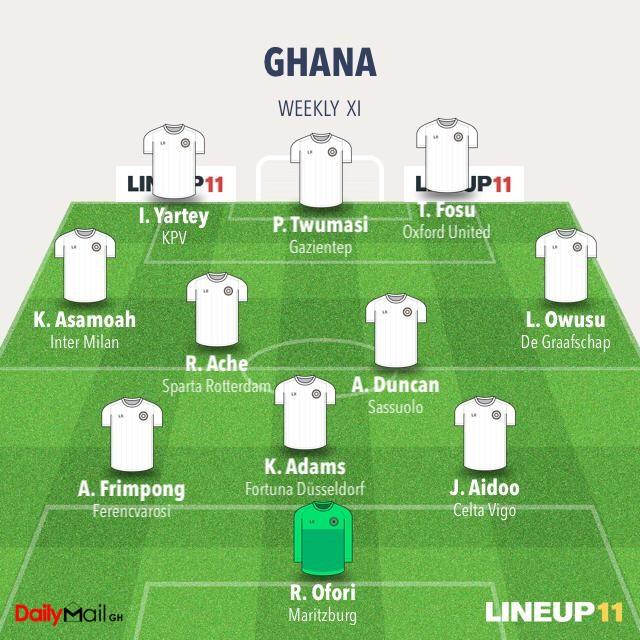 Another great week for Ghanaian players abroad with some notable performances coupled with superb goals. Dailymailgh.com presents our official team of the week:

The Ghanaian shot-stopper made some good saves but his side lost 2-1 to Mamelodi Sundowns. But for his alertness Maritzburg would have consumed an avalanche of goals.

The fairytale story of the talented defender continued in the Spanish topflight as Celta Vigo defied all odds to draw goalless with Atletico Madrid at the Wanda Metropolitano. Aidoo kept the dreaded Diego Costa at bay.

Playing in the heart of the Dusseldorf defence against Monchengladbach, the 6 feet 4 inches guardsman was a pillar at the back. He netted the opener for his side in the 6th minute and defended gallantly, despite the 2-1 defeat.

After excelling on Thursday against Espanyol in the Europa League when he came on as a substitute,  Frimpong was handed a starting role against Zalaegerszerg. He was very efficient as his side won by two goals to one.

Owusu who is arguably the best right (wing) back in the Dutch second tier was in his elements again as his side walloped FC Eindhoven 4-0. He defended well and moved forward to join the attack on countless occasions.

Another superb outing from the Ghana deputy skipper. He was one of the top performers on the day as Inter Milan defeated AC Milan 2-0 in San Siro in the local derby. The Ghanaian defended excellently and was dangerous moving forward.

It was a day Ache will forever savour as he put up a man of the match performance in Sparta’s 4-0 humiliation of Waalwijk. Ache did all the work in front of the back four. He netted the first goal and also set up Turkish international Halil for the third.

Duncan was very efficient in central midfield for Sassuolo as they dispatched SPAL by three goals to nothing at the Mapei Stadium.  The ambidextrous Ghanaian international served as the link between the defenders and the attackers and executed his duties well. He netted the third goal for his side in the 47th minute.

Fosu was the main man behind the 6-0 mauling of Lincoln City in the English League 1. The former Reading and Charlton winger was a threat throughout the game as the Lincoln City full backs could not track him down. He capped the great performance with a hat-trick.

The Ghanaian attacker is gradually bursting back to life in his loan deal in Turkey. Twumasi led the lines of Gaziantep and netted the second goal as they went away to beat Rizespor 2-1.

Yartey once again put up a top notch performance for KPV who thrashed Rops 4-1 in the Finnish topflight. The Ghanaian winger rifled home a screamer for the fourth goal in the 84th minute to take his goal tally to six in eight games.

We’ll register to vote against you – Customers of collapsed banks...

Adopt cost-effective interventions to address air pollution – Samira to WHO