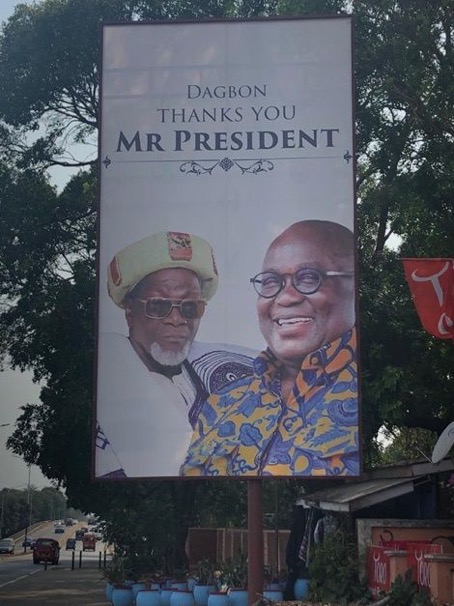 Just before Election’16, I wrote an article on ethnocentricity in our political firmament. It did not go down well at all with some people. I recall a press conference was even called by the side where the cap fit most and an avalanche of hate mail poured in. A young man whose father had run away from Ghana after Election ’92 when no one was after him, went to town and attacked me viciously. Both pere et fils have since been well rewarded! Oh, not forgetting the apoplectic incoherent and rather uneducated sounding lawyer who must have thought he was destroying my credibility by going on one of the television stations to call me a “prostitute” over and over! But the most intriguing hate mail was from someone with an Islamic looking name who more or less pronounced a fatwa on me by saying that I was being un-Islamic!

Well, I am afraid, I will have to put all such people through some trouble again…Sorry about that.

Imagine waking up one morning and finding huge billboards with John Mahama’s face, for whatever reason, exploiting the image of Nana Osagyefo Amoatia, the occupant of the Ofori Payin throne to push a political agenda.

Hell would explode and we would not hear the end of it. Mahama would be taken to the proverbial cleaners and by the time they finished with him, he would have no clothes on! How dare the pepe ni or ntani desecrate their sacred institutions in such a blatantly crass political manner, they would intone indignantly! Some of the local language fm stations would have a field day stoking and keeping alive the fires of indignation over and over…

But check this out: around the Ako Adjei Interchange in Accra sits or stands a gargantuan bill board (pictured above) which you can’t miss, showing an image of a majestic and dignified-looking Ndan Yaan Naa and a smirking triumphalist Nana Addo-Danquah Akufo-Addo. The legend accompanying the image says: “Dagbon thanks you Mr. President.”

I don’t know if the idea originated from him, or some advisors, or even some Dagombas, because it lacks sensitivity and is quite provocative. Dagbon is a traditional area that has just come out of a very traumatic period of its history involving regicide and social disharmony. The least politicians can do is allow it a period of quiet and introspection to recover. A period for Ndan Yaan Naa to pick all the pieces and unite his people into the once proud and productive kingdom Dagbon used to be. It is not for politicians to try to reap where they have not sown. After all, the original sin leading to the protracted unrest was perpetrated under the watch of the NPP of which Mr. Akufo-Addo was a cabinet minister. An incompetent security handling of a volatile situation bungled things into major tragedy. Over two decades on, many questions still remain unanswered – but for the sake of peace, it should remain that way until when a future generation, devoid of the divisive baggage of the present and immediate past can confront the history and give finality to it…

The fault-lines have not disappeared and the management of the peace in Dagbon must be handled with utmost delicacy without the dog-eat-dog crudeness of partisan party politics.

As I write, cracks are already beginning to appear in Dagbon. Ndan Yaan Naa is facing one of his first major tests. A petition purported to be from the Elders of Nanton Traditional Area has rejected the appointment of a new Nanton Lana. The petition is as recent as April 1 2019. Ominously, it ends in this chilling threat: “We send a word to you that the person appointed by NdanYaan Naa should never set foot on the soil of Nanton Traditional Area as a chief.” A clear security threat, if there ever was one…

Any politician who tries to exploit the uneasy calm in Dagbon for political gain is either ignorant or reckless about the undercurrents of tensions there. Aburyilli and Andanyilli may have decided to bury the hatchet but the peace should not be taken for granted for any politician to exploit with a rather flippant triumphalist smirk. It is not a win or loss for any political party, it is the will of Dagbon that has triumphed.

So why will you put the credibility of a traditional leader in jeopardy for your political gain? After you have created the false impression of allegiance to you, what happens when a different party comes to power? This is an unfair and perhaps even disrespectful political branding. Our constitution insulates our traditional rulers from partisan politics! That billboard is a clear example of political branding which should not be countenanced. In fact, if there should be any billboard saying thank you, it should be one showing Ndan Yaan Naa and His Majesty Osei Tutu II, Asantehene, who can be credited with midwifing the peace process to its desired end. And there will be an added significance to such a billboard that would not be lost on those who know and respect the traditional and historic bond between Dagbon and Asanteman…The Asantehene himself cautioned politicians from claiming credit as the peace process spanned Kufuor, Mills, Mahama, to the present.

Photo-op sessions between politicians and traditional rulers is not the issue here. There are many events and functions for that but not this kind of political branding. It is just not right!

In fact it will not serve any purpose for me to belabour this: it is quite straightforward and like Ronald Reagan once famously said to Mikhail Gorbachev of the USSR about the Berlin Wall: “Mr. Gorbachev, tear down this wall!”, I also say, “Mr. Akufo-Addo remove that billboard!”

…And don’t resurrect it during the 2020 campaign period for it would most certainly play a part in election unrest.

By Alhaji A. Harruna Attah, MOV

US Embassy in Ghana holds orientation for 2021 Mandela Washington Fellows