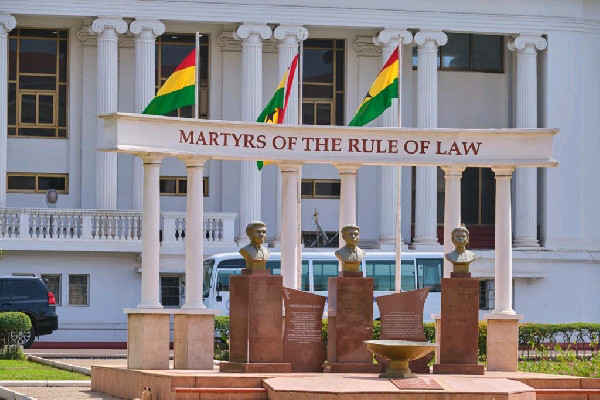 Attorney General Godfred Yeboah Dame has said the Supreme Court misconstrued and changed the law on hearsay, which led the apex court to arrive at its 3-2 majority decision that prohibited Justice Clemence Honyenuga from continuing to sit on the GHS217-million financial loss case involving ex-CEO of COCOBOD Dr Stephen Opuni and businessman Seidu Agongo.

“In any event”, the AG noted, “I respectfully contend further that the ordinary bench rather committed a fundamental error, resulting in a substantial miscarriage of justice when it wrongly construed sections 116, 117, 118, and 126 of the Evidence Act 1975 (NRCD 323) on the law on hearsay evidence”.

“The effect of the erroneous construction of sections 116, 117, 118, and 126 of the Evidence Act”, the AG’s opinion, “was to, without compelling reasons, change the law on hearsay”, insisting: “This constitutes an exceptional circumstance resulting in agross miscarriage of justice”, the AG said in a review process filed on his behalf byEvelyn D. Keelson, Chief State Attorney of the Office of the Attorney General, Prosecutions Division.

The AG argued that“an error allegedly contained in an interpretation for provision of the Evidence Act or a decision of the Supreme Court, binding on the high court, even if subsequently considered by this court as erroneous, is one within the jurisdiction of the court and does not constitute an error patent on the face of the record to warrant the supervisory intervention of this honourable court”.

In addition to his prohibition, the apex court, on 28 July 2021, granted an application by Dr Opuni and quashed Justice Honyenuga’s decision to reject certain witness statements which the accused person found favourable to his case.

The effect of the Supreme Court’s decision is that the Chief Justice would have to appoint a new judge to hear the case.

In the affidavit in support of the review application, the AG “respectfully”, contended that the “decision of the ordinary bench of this honourable court, dated 28 July 2021, contained fundamental and grave errors, which have manifestly resulted in a substantial miscarriage of justice and, therefore, ought to be reviewed by this court in exercise of its jurisdiction under the Constitution and CI16”.

The AG further argued that the decision of the ordinary bench of the Supreme Court, “effectively ignored the time-honoured fundamental and mandatory preconditions for an invocation of this honourable court’s supervisory jurisdiction for an order of certiorari to quash an alleged error contained in a decision of the superior court”.

Further, the affidavit averred: “As is apparent from the decision of the majority, and on all the facts of the instant action,the alleged error committed by the trial judge, regarding an interpretation of Section 117, 118 and 126 of the Evidence Act, 1975 (NRCD 323) on hearsay evidence, is neither an error patent on the face of the record nor one which affected the jurisdiction of the high court”.

The AG insisted: “As stated in the decision of the majority, the trial judge, in arriving at the decision complained of, acted in accordance with the doctrine of stare decisis by interpreting relevant provisions of the Evidence Act in line with the construction placed on same by this honourable court in Ekow Russel v The Republic (2017 – 2020) 1SCGLR 469”.

The AG argued further that “to the extent that the decision of the ordinary bench had the effect of erroneously altering or departing from the fundamental principles governing the exercise of this court’s supervisory jurisdiction, same was bad in law, constitutes an exceptional circumstance resulting in a substantial miscarriage of justice and warrants the exercise of this court’s review powers to correct same”.

To the AG, “the ordinary bench committed a fundamental error in prohibiting the trial judge”, who, he argued, “only performed his duty as required by law, to evaluate that evidence adduced by the prosecution in order to determine whether a prima facie case had been made against the respondent”.

Also, the AG noted that the trial judge, from a holistic examination of the ruling, clearly understood the fundamental duty imposed on him by law, to assess whether on [the] strength of the case of the prosecution, the accused persons ought to be called upon to open their case and processed to discharge same”.

“The alleged errors by the court complained of by the respondent herein, did not vitiate the exercise undertaken by the trial judge so as to be amenable to an order of prohibition”, the AG argued.

The AG said it did not consider the concerns of the accused person as constituting a strong basis for Justice Honyenuga’s removal from the case. “A decision to prohibit a trial judge, who has conducted a criminal trial for almost four years, at which the prosecution has called all of its witnesses, from further hearing of the matter, must be on basis of only compelling circumstances which showindisputable biason the part of that judge and not on account of matters as complained about by the respondent herein”.

Additionally, the AG underscored that the “decision of the ordinary bench results in a substantial miscarriage of justice, since it has the effect of placing the case in the hands of a new judge, who has not had the benefit of the full trial, observing the demeanour and composure of the various witnesses called by the prosecution and assessing their credibility”.

Mr Dame, thus, noted that “if a trial de novo of the respondent herein results from the decision of this court, dated 28 July 2021, same will occasion substantial miscarriage of justice, asthe constitutional requirement of fair and expeditious trial will not only be violated but also, the prosecution will be put to enormous expense, inconvenience and hardship in commencing a new trial”.

It said “justice and fairness require that the decision of this court, dated 28 July 2021, be reviewed”.

It is recalled that in a video that went viral ahead of the 2020 polls, Justice Honyenuga, in his stead as Torgbui Ashui Nyagasi V of the Nyagbo Traditional area, told President Akufo-Addo during his tour of the Volta Region that “…we wish to congratulate you for the excellent manner you are governing this dear country of ours, it is our hope that with your vision and the gains made in your first term, Ghanaians may consider giving you another four years”.

The lead counsel for Dr Opuni, Mr Samuel Codjoe, raised objections to the judge’s continuous sitting on the case since, in his estimation, the supposedly criminal case had metamorphosed into a political one with some NPP bigwigs including Mr Dame, a deputy attorney general at the time, backing the re-election bid of the governing party on the success of this case.

This, he said, made the judge unfit to continue the trial since his comments aligned with the aspirations of the NPP.

Justice Honyenuga, in his ruling on March 16, 2020, dismissed a motion for his recusal describing it as incompetent and misconceived.

He further described the allegations of bias against him as “mere perceptions and exaggerated to suit the first accused and others” adding that “the allegations, the alleged comments are non-judicial and will not constitute bias or any other matter”.

On July 13, the lawyers of Dr Opuni told the Supreme Court about how one of two pieces of evidence that gave contrasting accounts on Lithovit fertiliser, was rejected by Justice Honyenuga, as he sought the judge’s removal from the case.

Moving the application, Mr Codjoe argued that a “statement given by a farmer, which said Lithovit fertiliser was good, was rejected and another one, which a farmer said Lithovit was bad, was accepted.”

Dr Opuni’s lawyers filed the Supreme Court application for Justice Honyenuga’s removal in July, in which the ex-CEO alleged that his right to be heard fairly had been breached by the judge, who he averred, had exhibited bias against him in the trial.

In the lawyers’ view, Justice Honyenuga committed an error of law when he rejected some witness statements said to have been obtained by the state during investigations into the matter.

Among those statements were the then-Head of the Cocoa Research Institute’s denial of being coerced to do his work, a procurement officer’s comment that exonerated Dr Opuni of any procurement breaches, and an endorsement of Lithovit fertiliser.

The lawyers said the statements were withheld by state prosecutors and only made available when they applied for them and also rejected by Justice Honyenuga with the following justification: “However, counsel tendered exhibits 71,72, and 73 being statements of Genevieve Baah Mante (Mrs), Fiona Gyamfi and Paula Adjei Gyang, which confirm that there was another test conducted on the Lithovit supplied to GSA for further testing. It is trite that a witness should not talk about something of which he had no personal knowledge but rely upon his own observations and recall of the matters in dispute, and this is the rule against hearsay provided under section 117 of NRCD 323. See Ekow Russel [2017-2020] SCGLR 469 Holding (4). It is also trite that a court could admit documents into evidence and reject same during Judgment. In view of the decision in Ekow Russel v The Republic, a Supreme Court decision, this court was wrong in admitting Exhibits 71,72 and 75 since they offend against the hearsay rule in section 117 of NRCD 323”.

“In the circumstances, this court rejects exhibits 71, 72 and 75 as hearsay since the authors were not under section 117 of NRCD 323 available to answer questions and in the denial of PW7 about another scientific test, these exhibits are hereby rejected as marked as ‘rejected’”.

Justice Honyenuga further said: “Moreover, by the decision of the Supreme Court in Ekow Russel v the Republic (supra) I would reject exhibits 58,59.60,61,62,63,64,65,66,67,68,69,70,71,72,73,74 and 75 as they offend the hearsay rule in Section 117 of NRCD 323 as a court has power to reject evidence during the judgment stage. The exhibits were all tendered through witnesses who were not authors and could not answer questions based on them. Meanwhile, the witnesses are available”.

Concerning the allegation of bias against Justice Honyenuga, the lawyers cited the following statements: “All these were perpetuated to facilitate the 2nd and 3rd accused’s business and defraud COCOBOD. Indeed, these acts were all perpetuated to facilitate and intentionally, voluntarily to aid the 2nd and 3rd accused to perpetrate fraud on COCOBOD by supplying a different product from what was tested and approved.”

“…However, the 1st accused, although he knew the correct state of affairs and knowingly facilitated and aided the 2nd and 3rd accused to defraud COCOBOD.”

“The 1st accused made things easier for the 2nd and 3rd accused to succeed in their enterprise of defrauding.”

“The 1st accused, a scientist with all his knowledge and skill, had the benefit of an original Lithovit Foliar fertiliser submitted, tested and approved by him yet, knowingly, he agreed and caused the state to lose millions of cedis in foreign exchange by paying these monies to the 2nd and 3rd accused persons.The 1st accused, thus, caused financial loss through this action”.

The Supreme Court, eventually, granted the prayer of Dr Opuni thus: “The test is an objective one based on the principle that not only must justice be done, but it must be seen to be done. As the authorities say, bias is so insidious that the judge himself may not even be aware that he has a bias in the matter under consideration. It is for the reasons explained above that I hereby grant the prayer for prohibition in order that justice will be seen to be done in this case. In conclusion, the application succeeds on both counts and is accordingly granted as prayed.”