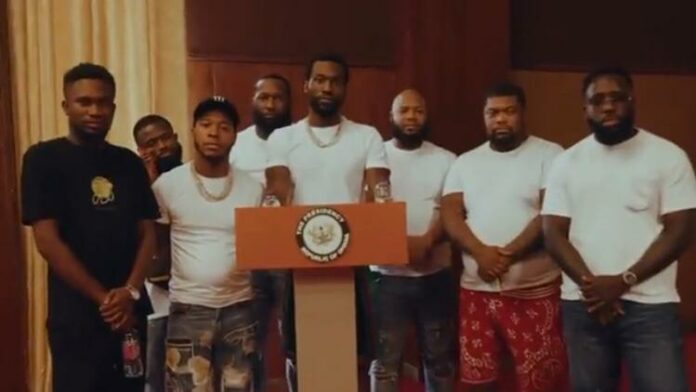 The Jubilee House, known to be Ghana’s highest security zone and serves as the Office of the President, has been trending since last night.

President Akufo-Addo together with American rapper Meek Mill were the most talked about on Twitter since the release of a music video by the rapper.

The teaser of the video featured some parts of the Jubilee House and most importantly, the podium of President Akufo-Addo which he uses to address the nation.

The rapper was also seen in the company of some backing performers.

However, Ghanaians upon seeing the video have expressed their displeasure with the American rapper and President Akufo-Addo.

Comments making waves on the micro-blogging site say that the Jubilee House, which is the highest security zone in the country, has now become unsecured.

The MP for North Tongu Constituency, Samuel Okudzato Ablakwa has also expressed his concerns about the video. In his post on Twitter, the MP called for the dismissal of those responsible for the desecration of the Jubilee House.

All those responsible for this despicable desecration of the Jubilee House by Meek Mill must be fired immediately.

How do those explicit lyrics from the president’s lectern project Ghana positively?

Is Ghana’s seat of government no longer a high security installation? pic.twitter.com/Wwo2rbGIjl

SOURCE: Myjoyonline contributed to this story