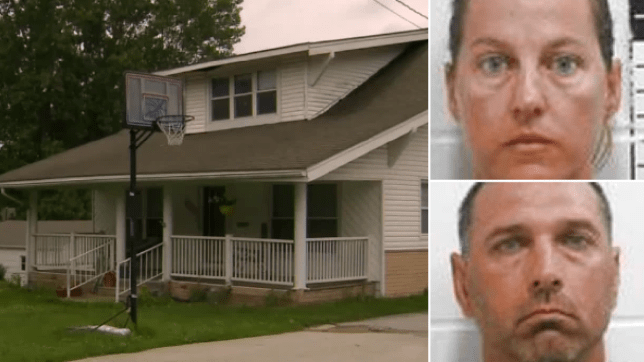 A couple who adopted two children from Ghana who neglected and starved have been fined $12,500 and given 100 hours of community service.

Kenny and Kelly Fry adopted the brother and sister from Ghana to live with them in their home in Iowa, USA.

They were rescued by social workers in early 2018.

The children, who were eight and nine-years-old at the time, first came to the attention of social workers when they were locked outside their home in extremely cold weather.

The neighbour told KCCI that the children were knocking at the door and crying to be let in.

‘I just thought “something is not right” just knowing that it was so cold outside and those poor kids were locked out,’ the neighbour said.

When social services rescued the children originally adopted from Ghana, they were found to be starved and malnourished.

They lived on a diet of exclusively oatmeal.

The kids informed social workers that they were forced to stay in one room all day and that an alarm would sound if they left.

The parents would then force the Ghanaian children to do squats and push ups as punishment for leaving their bedroom.

The room had just small plastic mat, a blanket and a bucket for the children to use as a toilet.

The Fry’s biological children were not treated in the same manner as the adopted children and had a ‘comfortable life’.

The couple struck a plea deal that saw several felony charges dropped on the condition they plead guilty to two counts of child endangerment.

They were sentenced to two years probation and 100 hours of community service, as well as the $12,500 fine.

The two children have been readopted and are said to be ‘thriving’.